Rarely do I come home from an agricultural conference feeling as if much good has come of it since there seems to be so much negativity involved with the overwhelming crush of monoculture intent. Last winter it seemed it was all about pollinators and Bt-flavored GMOs. The year before there was a whole round of climate change fears starting with presentations by Will Steger and continuing on into last spring when a University of Minnesota forestry professor forewarned us about deciduous understory growth that is already supplanting what we know as the great North Woods. So it goes.

This year water has come to the topic table. The corporate buy up of water rights by Nestle in California, or fears that Los Angeles and southern California and even San Paulo in Brazil, two of the world’s largest human residencies, will be out of water by October. Here in Minnesota we fear for what the mining of fracking sand for the oil fields will do to our underground aquifers, and to be truthful, what horrific pollution is being caused when those same sands are pumped into the oil fields to contaminate underground water sources in many parts of the North American continent. Now there is talk of a huge, undeveloped tar sand oil field in northern Mexico … meaning we can expect even more contamination of water resources. 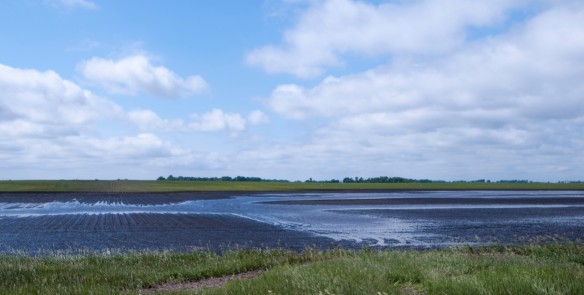 Though temporarily fill, drained wetlands like this one no longer allows for a recharging of the prairie aquifers.

At the conference we were told of how those water friendly tensiometers that measure crop moisture stresses under center pivot systems in the High Plains began beeping like Vegas jackpot machines last summer … for all the wrong reasons. It seems the evapotranspiration rate was so high there that irrigating farmers actually shut off their pumping of water from the diminishing Ogallala Aquifer because the cost of “keeping up” was simply too expensive.

We have our own water issues right outside our windows here on the former prairie. Yes, our farmers continue to add more efficient, pattern-tiled drainage to better flush excess spring melt and early season rainfall from their fields and into the prairie rivers. But wait. Global climate change has also introduced a rather recent trend of choking droughts following the initial spring moisture feed, often around Independence Day. Meaning that in a given year a crop producer can experience both the drowning of a crop due to incredibly high moisture levels and a crop-starving drought in the same field in the same year. 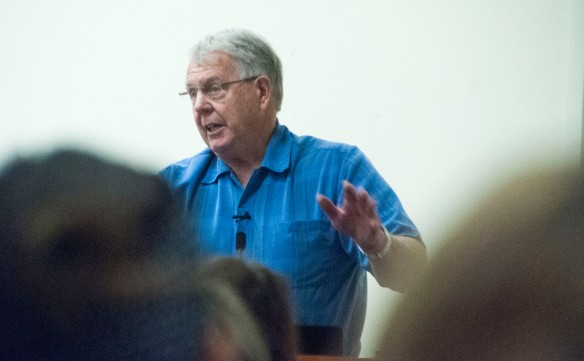 So those drainers who can’t wait to flush excess rainwater downriver from their cropland are now tapping into groundwater and adding center pivot irrigation rigs on those same fields to sustain commodity crops like corn, soybeans and potatoes. Groundwater that’s not being recharged at anything close to its historic rate due to wetland removal and tile drainage systems. Remember, it’s a rare instance when any of the drained water is stored, and repeated efforts of attempting to have those who are installing patterned tile upgrades with water table management devices have gone unheeded. While this drainage/irrigation situation is perplexing, it is also becoming ever more common. Indeed, since the conference a friend told of receiving a letter asking permission for the wells on his rural home site to be monitored because an outside investor has purchased a farm within a two mile radius and has sunk an irrigation well onto the property for a center pivot.

“I don’t want my well monitored,” said my friend. “I just want my water.”

Are you wondering about that “feel good” yet? Yes, it has to do with water and farming. 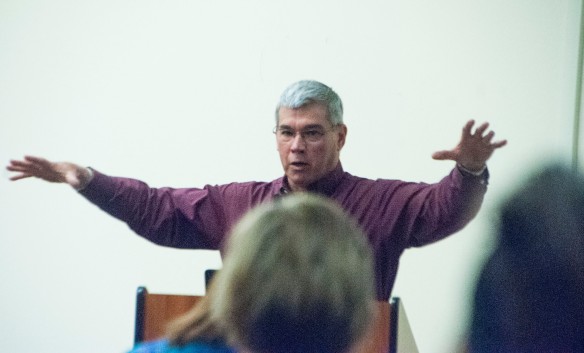 Jerry Hatfield, director of the USDA/ARS National Laboratory for Agriculture and the Environment, discussed the changing seasonality and intensities of precipitation, and suggested the time might be right for new cropping mixtures.

It happened during the recent Farmers Lead the Way conference held at the Southwestern Minnesota Research Station to explore innovative ag practices designed to adapt to the changing climate and weather conditions. I had been invited to hang my Art of Erosion show during the conference, and was invited to participate as well. In the morning speakers like Mark Seeley talked about the effects of climate change on cropping patterns, then after lunch several breakout sessions were held around the large conference room. That is where I heard Grant Breitkreutz, a Redwood, MN, farmer, talk about, of all things, cover crops.

We have both been interested in cover crops for specific reasons, Rebecca with her work with the Land Stewardship Project, and us both with how cover crops might reduce “snirt” problems that are increasingly severe and heightened by a climatic change of reduced snow cover many farmers have failed to address with crop cultural practices. Breitkreutz has, and offered some rather unexpected benefits by doing so. Ironically and by coincidence, he began toying with cover crops about the same time new drainage tiles were installed on his farm … both about a decade ago. He uses a tractor-bourne seeder, or an aerial seeder if it’s too wet, to interseed a mixture of legumes, rye grass and vegetable root crops like radishes and turnips into his row crops of corn and soybeans.

Combining the arts, including my Art of Erosion canvases, with science was an effective and interesting way of handling a touchy subject matter.

“Once we figured out what we were doing, our tiles have been dry. Meanwhile, we’re actually rebuilding our soil. Running a no-till planter through our fields is like planting into a garden,” he explained. His soils have come alive and have water holding capacity while reducing crop inputs. All without diminishing yields, and perhaps as importantly, without added machinery costs. Consequently, his soils are not blowing nor is he needing irrigation because of the increased carrying capacity of soil moisture due to the deep rooting action of his cover crop mix.

“My neighbors initially thought we were nuts. Now they’re driving into the yard asking us what we’re doing. I don’t have time to teach them all, which is why I do these meetings. Cover crops have been a total win-win for our farm,” he said.

It is always refreshing to hear a positive story, and especially one coming in the face of so many destructive resource management practices. Cover crops are likely not a panacea for every ill-conceived production practice, yet they certainly should give pause to those who have seen those telltale dirt dunes along the roadways … and perhaps even for those who are thinking of sinking hard earned cash into an irrigation rig and deep well. We can only hope.