Morris area naturalist Dave Ernst delivered a dire warning as we were visiting in the meadow of the Lake Johanna Esker … there would be no Showy Ladyslippers to be seen. Not here.

“The county mower came through and cut a swath along the roadside,” he said, describing the reason why.

While this wasn’t our intended designation, we were still saddened. Actually those official State Flowers are not on the Esker itself, but along the swampy “grader ditch” just outside the fence and along the road. Ditch banks traditionally hold some native forbs you won’t see elsewhere due to the plowing, ditching and tiling of native prairies. Some of us, including Ernst, go to great lengths to pay homage to what’s missing. In some instances, forever. 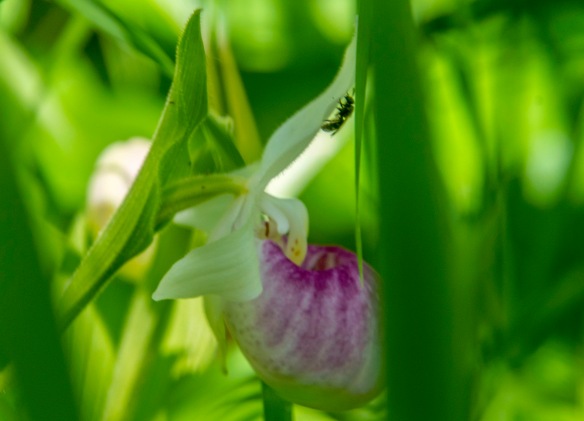 Hidden deep inside the woods was a small clump, which I shared with an ant!

Was there a necessity on running a mower along the roadside? Here, where the swath reached for only a few feet? I’m not on the County Board so I haven’t an answer. In Iowa there is this: According to Iowa Code 314.17, mowing roadside ditches is restricted until July 15, to protect young pheasants and other ground-nesting birds until they are ready to fledge. The law, which applies to county secondary roads as well as state primary and interstate highways, also protects habitat for pollinators and other beneficial insects, including crop-pest predators. Exceptions for visibility and weed control are built into the law, but non-essential mowing – including cutting for hay – is prohibited.

There was no hay to be cut on this swath. Just some poorly spaced patches of grass and a few solitary Showy’s. So we moved along. 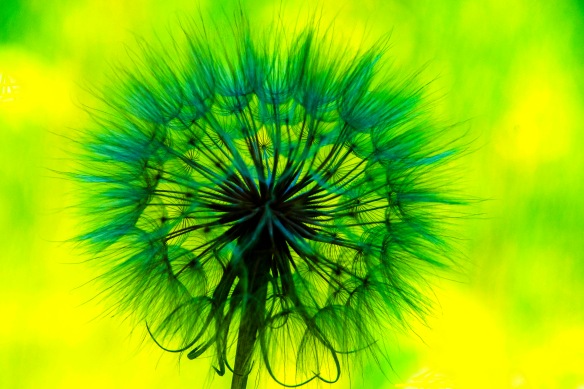 While we were there for the Showy Ladyslippers, there were other joys to the eye including this Goatsbeard, silhouetted against the sunny background.

My partner for the adventure was dear friend, Mary Gafkjen, who had researched another possible site for the Showy’s … the Lake Wobegon Trail between Avon and Albany. This was her alternative to my suggestion of driving up to Highway 34 between Detroit Lakes and Park Rapids where the damp, unmown roadside is often a mecca for ladyslipper lovers. Because of a prior commitment she had, we needed to be back to her place by late afternoon and the Lake Wobegon Trail was much closer … and her research had evidence of the Showy’s being there.

There was even a mile marker for reference although finding it offered another challenge. We parked on a gravel roadway between the two towns and started our hike up the paved bicycle and walking path toward Albany. Neither of us are young, so the sun and humidity beating off the blacktopped path offered a challenge of a different kind. While the trail actually extends all the way to Fergus Falls, my hope was that we would be able to spot them long before then. It was thrilling when I spotted a couple of Showy’s hidden in the woods just off the trail, then we found a pair and another small clump. We were pleased with our respective discoveries and were about to hike back when we met fine-art nature photographer and author, Barb Kellogg, who suggested there was another grouping of Showy’s further ahead and encouraged us to follow along.

There was obviously more here along the bike path than the Showy Ladyslippers. As we ambled along there were numerous joys to the eye. I truly wasn’t expecting much imagery-wise because of the cloudless skies and sheer sunlight. You learn to make do regardless of light conditions. Those are challenges I enjoy, and the more I learn about the mechanical aspects of my camera, thanks to a recent class at the Gathering Partners “convention” in Willmar, the more options I can use for my art. 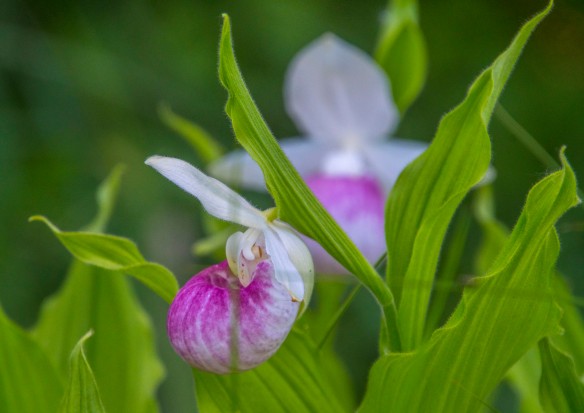 Named as Minnesota’s State Flower in 1902, the Showy is one of 49 native orchids in the state, and one of six ladyslipper species.

Among our other finds were Wild Rose, Rue Anemone, American Vetch, the fluffy balls of Goatsbeard, along with other options … so much so I spent a long while downloading my cache of the day. We left the trail with some nice images and a thirst for some icy water, along with two blisters on the sole of Mary’s foot!

There wasn’t much mystery involved in finding the Showy’s. My first find was one of luck, for they were properly hidden deep in the marshy underbrush. The others? Locals know the trail well, and each year a Ladyslipper Nature Ride is held on the third weekend of June, so the “hints” were well marked. Yet there they were in their pink and white glory, standing tall for ladyslippers. It is one of 49 native orchids in Minnesota, and the tallest of the six native ladyslippers. Blooms will not appear until the plant is 15 years of age, and they grow in a strict micro-climate … usually in a woody fen with subterranean rhizomes branching through the bog-like ecosystem to form the clusters.

Minnesota named the Showy as its state flower in 1902, and made it illegal to pick or transplant in 1925. Whether that legality extends to county roadside mowing operations is beyond my knowledge of the statutes. 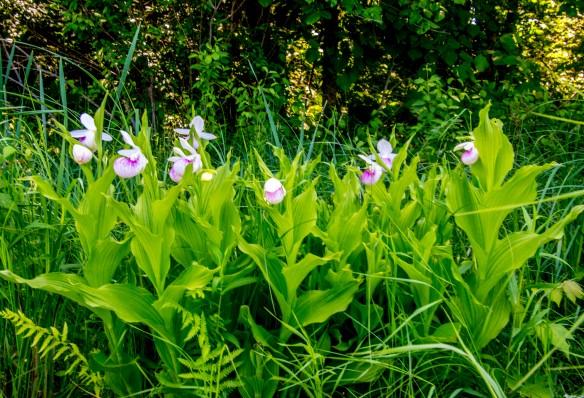 Our extended hike, thanks to photographer and author, Barb Kellogg, yielded a nice cluster.

So for another season I can rest comfortably, for once again I’ve had the pleasure of finding and photographing the Showy Ladyslipper. They are truly a class into themselves, standing boldly and beautifully. It’s still a pure treat when you find them, and a joy that extends beyond their short season of fame.

My anticipation in those first steps taken toward the “bog walk” was somewhat reminiscent of those Christmases as a child, back when my dream was of seeing a bright red bow on the handlebars of my first bicycle. In this case my anticipation was if we would find a native Dragon’s Mouth orchid in the spongy, muddy ecosystem.

I wish I could adequately describe a Dragon’s Mouth. I cannot for I’ve never seen one. Thanks to the guidebooks I can say the stem is about six to eight inches tall, and at the bent apex is a pinkish, delicate flower with yellow tendrils. 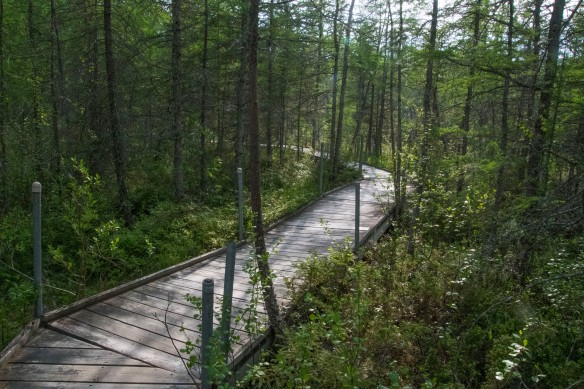 The boardwalk through the bog at Lake Bemidji State Park brings many unexpected treasures to the eye.

My quest has not gone unrewarded, and that begins with the bogs themselves.

Bogs are rather special places and so unlike the prairie. If the “yang” is of a prairie, the “yen” is of a bog, for they are nearly complete opposites of one another. Each is as fascinating as they are different. Equally as fascinatingly different are the flora that live in each. Images of Prairie Smoke bring as much wonder to some as does a bog’s Pitcher Plant to others, and of course, neither could exist as a neighbor to the other. 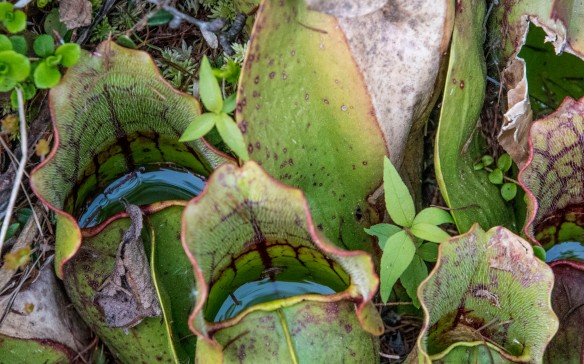 Bog plants are interesting in so many ways, such as the “water traps” to capture insects by the Pitcher Plant.

Both ecosystems are home to numerous orchids. As rare as the Dragon’s Mouth is for me, White Ladyslippers may be for others. Even some prairie people are surprised and fascinated by the “whites,” often asking if they’re real, of where they’re found, and even if they aren’t paled versions of Minnesota’s state flower, the Showy. Actually, Whites are to blame for my late “blooming” fascination with native orchids. I began photographing Whites about a dozen years ago and was later surprised to learn of the vast number of other orchid species native to Minnesota, all with wildly diverging colors.

Perhaps the rarest orchid found in virgin native prairies is the White Fringed Prairie Orchid. So rare it’s on the federally protected endangered list. Then there is the Nodding Ladies’ Tresses, rare in our part of the state as an early fall spiraling white flowered orchid. Equally as rare as the White Fringed is the prairie is the Calypso of the bogs. Global warming issues, actually, are threats to orchids no matter their biome. 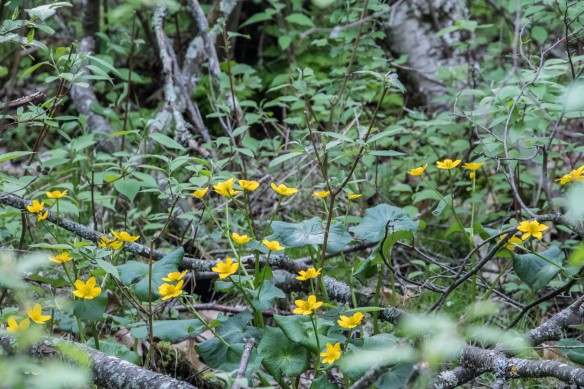 Marsh Marigolds are so colorful and inviting to guests of the bogs.

So, yes, back to the “yen.” My introduction to bogs came through a long friendship with retired State Trooper Harold Marty, who was an investigator with the patrol. He and his wife, Kimberly, took us to the Lake Bemidji State Park where there is a lovely boarded bog walk. Then, years later, I happened upon a bog near Grand Rapids during a Gathering Partners photography presentation I gave to a group of Master Naturalists where we encountered the true jewels of the bog, Marsh Marigolds. Rich, yellow blooms seemed to serenade us from all directions, both boldly in the open and secretively peeking from obscure, uneven bog structures. A few years ago en route to a fly fishing expedition in Ontario, I detoured off Highway 71 into the Lake Bemidji State Park to revisit the bog … and yes, to see if the Dragon’s Mouth was blooming. Recently, my friend, Mary Gafkjen, and I made the trip back.

The Dragon’s Mouth is one of two bog-based native orchids I really want to photograph: it and the Calypso. Although late May is apparently bad timing for either, though not too late for the Marsh Marigolds and a host of other incredible bog plants. False Trout Lilies. Those bowl-shaped Pitcher Plants. Bog Rosemary, a delicate little plant you can’t help but love. And, many others. All truly unique to bogs. 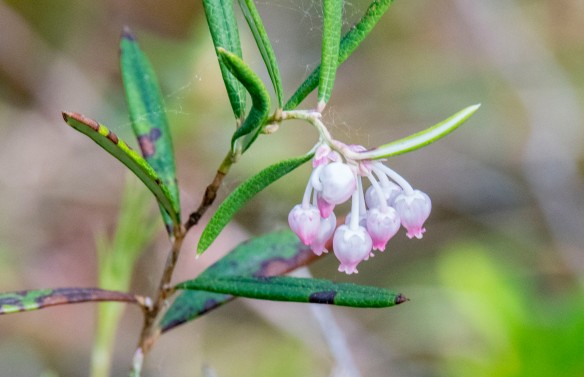 I feel in love with the delicate beauty of the Bog Rosemary, among other plants, so the rewards have been many despite not seeing a Dragon’s Mouth orchid.

On my first walk I discovered a new orchid .. the Stemless Ladyslipper. I mistakenly thought I had found the Dragon’s Mouth until the park naturalist corrected me, and apparently there is not much similarity between the two. I’ll have to take her word for it since I’m still in search of the Dragon’s Mouth.

Who’s to fuss over technicalities? The Stemless is a beauty. And have been rising in their magnificent glory for my past three trips to the bog. If you can imagine that moment when a ballerina rises from a bent position, her hands near her ankles, to rise to the “fifth” position with arms and hands extended skyward in a classic ballet  pose, then you can imagine the beauty in the opening of a Stemless. Poetic grace and classic movement, all in a blend of colors to make a dancer proud if not envious. 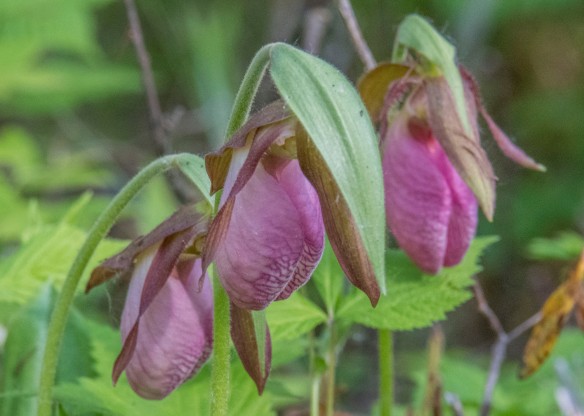 The Stemless Ladyslipper offers poetic grace and classic movement, all in a blend of colors to make a dancer proud if not envious.

So my anticipation and quest continues. From here at Listening Stones Farm the drive to the Bemidji bog is a long four hours one way. And, as a friend asks, “For a flower?” Yet, it’s more than that. Indeed, for that quest, as Aldo Leopold suggested in his Sand County Almanac, is when “the opportunity to see geese is more important than television, and the chance to see a pasque-flower is a right an inalienable as free speech.” So my quest, and anticipation, continues.