via An Anonymous Gift

A hearty wind roared through the prairie last night. Some would say a “freight train” wind. Hardly a rarity, for such winds are historically common if journals of immigrant prairie women serve witness. These winds are among the reasons why our autumns here on the “high, wide and lonesome” seem so abbreviated.

Leaves, so delicate and beautiful in death, are quite vulnerable to such winds. Same with snow. We find it quite odd, for example, to have snowflakes drift down from the sky, as if there is gravity. Snows here come horizontally, at near breakneck speeds, it seems. I was thinking of these horizontal happenstances while on a recent trip to Brede, Holland, where we were blessed with a beautiful little alcove balcony over a courtyard where stood a beautiful, 200 year old oak with leaves as golden as the sky was blue. It was actually mesmerizing to watch as leaves simply “rained” from the limbs and branches in descent to soft, splash-less landings.

Along the hills and ravines of Big Stone Lake, the colors were briefly magnificent.

Those leaves were a troublesome malady for our hotel host, Suzanne Kranze, who spoke of her frustrations of having to sweep the courtyard clean every few days. “Unlike your time in Minnesota,” I joked, “where the winds would blow them off to a neighbor’s yard?”

“Only if that would happen!” she said with a smile.

Our’s was actually a very colorful autumn, truth be told. In all my years here I cannot recall maples offering a more vibrant display. Magical and vivid. Then in the first weeks of October the winds came and within days much of the yellows and reds littered the savannas or were blown away to distances unknown. 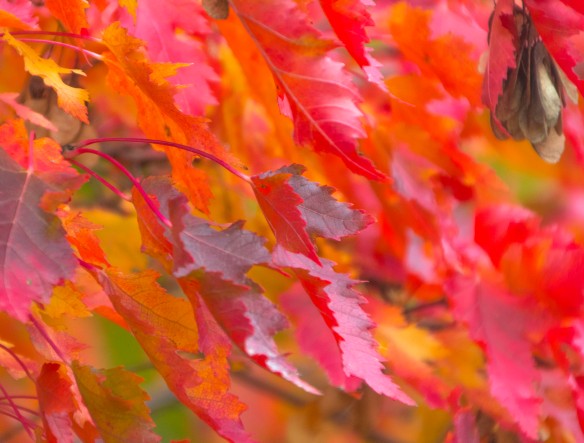 Yes, the maples were as colorfully vivid as ever before.

Ah, but autumn. You of magical colors, of browning, windblown grasses; of trees glowing in the late afternoon light. Warm afternoons following mornings of frosted grasses. If only you could last a little longer.

If I were a poet I would write a sonnet. If I were a composer, perhaps a concerto. Being neither, I try to make the best of it with a camera. 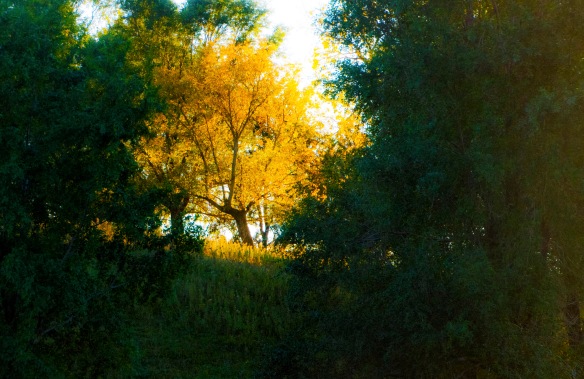 Peeking through the early October greenery, a moment of splendor!

Yet, ours was a tough autumn. Especially for the farmers. Too much rain on top of a soaked water table. Yet the colors were magnificent, even if the oaks and some of the other trees grasp their greenish chlorophyll in last gasps of annual oxygen. I was reminded of just how condensed out autumns really are after that brief trip to Europe that included a train trip across Holland and a car trip into the hillsides of Hungary. Outside of Budapest we traversed through roads that would have made the Ozarks proud, surrounded by a mix of hardwoods in full autumn splendor. Even in Missouri last week some color existed. Not here.

In fog along the Minnesota River … beauty in yellow.

For a short while our nearby hills were blessed, and the road that curves along Big Stone Lake guided you through a glorious and beautiful setting. On what we call the “lake road” weaving north out of Ortonville, our autumn colors held steady with leaf color all around … while they lasted. In what gives the prairie grasses their chance to dance and wave as a foliar sea, the same caused the demise of our colorful splendor. Yes, those winds of the prairie.

Winds like we experienced again last night. Winds that seemed to roar and rumble especially in a quiet house where my sweet dog, Joe Pye, cuddled against my leg with the only other sound being that of the subtle turning of a page of a book being read.

To awaken to bare ground this morning was a blessing, yet it was a wind foretelling of a seasonal shift. High winds, like that of a blizzard, seem more common in winter than autumn.

And the leaves? Long gone, both from the trees and from the lawn. An anonymous gift to some neighbor downwind …