Ever since the first frost, I’ve been saying that I need to get my garlic planted. Looking at the weather this week, and realizing that the end of all possible planting will come any time now, I determined that this weekend was IT–come hell or high water (or blizzard, or heatwave).

That kind of commitment might’ve caused me to be a bit curt with some generous and friendly people in the past few days, who extended invitations for goings-on over the weekend. “I’m GETTING MY GARLIC IN!” I’d say, and then sort of apologize for being so rude–without, of course, giving one inch on my scheduled plan.

John has been building new doors for the barn, and he’s been trying to hang them on his own. I might’ve suggested that he FIND SOMEONE ELSE TO HELP HIM because I AM PLANTING GARLIC this weekend. It might’ve been my imagination that he looked at me a little strangely–like, OK, so you pop the garlic in the ground and then we hang the doors. Hmm, yes, well…

The first issue was the garden it was going in. The upper field garden is a new garden this year, with all the attendant weed catastrophe along with chicken depredations to the raised rows. Bindweed? Check. Canada thistle? Check. Smooth brome? Got it. At least I pulled the tomato plants and mowed the aisles last weekend. That part was done.

Now I just had to go along the rows (both sides, and the middle) with my digging fork to loosen the soil. Next came working all that soil with the hand cultivator, up one side of the row and down the other, painstakingly removing as many weeds, roots, and root hairs as possible, and throwing them in a bucket for the chickens to scratch through. Rocks get tossed in the aisle for later removal to the rock pile.

On to amendment–opening up the long-cooking compost by the chicken pen and filling three big contractor wheelbarrows for each row. Those get spread down the row and worked in again with the hand cultivator. Oh, look! More weed roots I missed! None in the compost, though–there’s nothing in there but goodness from the coop, and when I cracked the center of that pile, it steamed. A quick check with my soil thermometer… 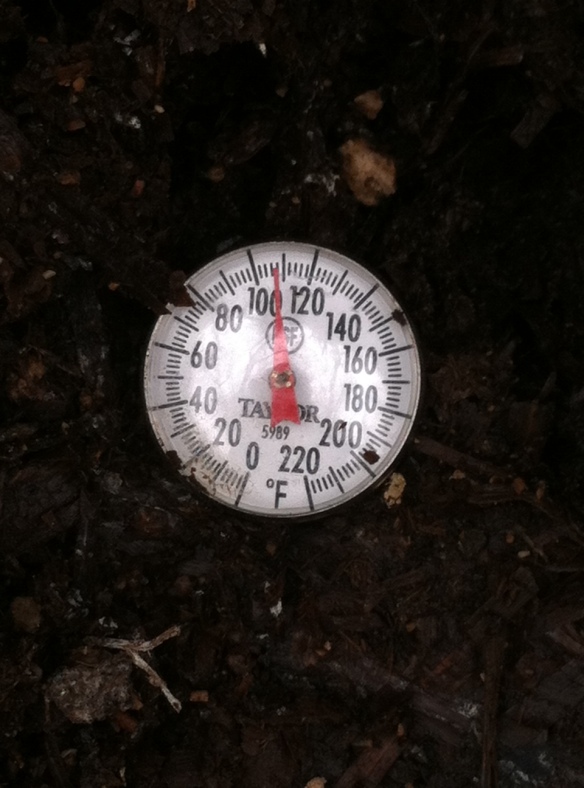 Once the beds were prepped, I “cracked” the garlic heads (broke apart the cloves in the heads I’d saved for planting)–six varieties for planting this year: Music, Chesnok Red, Indiana Brown, German Extra Hardy, Montana Giant, and German Red. Last year I also grew Inchelium Red, but it did poorly in our heavy soils, so we’re eating the pitiful amount I harvested and leaving the growing of it to those whose soils are better suited.

I’ve gotten my seed stock from several local growers over the past couple of years–some varieties started with only a couple of bulbs, some with a more generous supply. The idea is to start with those small quantities, trial them, and build up both eating and seed stock of those that we like and that do well on the farm–potentially to bring some to local markets in the future. I don’t anticipate being a major garlic grower (I’m an incurable generalist when it comes to growing vegetables, and I’m an incurable perfectionist when it comes to prep and planting), but it’s nice to have garlic as part of the market mix.

Once cracked, the garlic gets planted 2-3″ deep and 8-10″ apart in the row. The beds themselves are about three feet wide, so I plant two rows per bed, a foot apart. Name stakes are hammered in, and the whole bed covered with a couple inches of straw. I prepped and planted one thirty foot row yesterday afternoon, and one this morning. Not exactly massive commercial scale or efficiency, but the care these beds receive now will benefit future crops planted there (and mean less labor for me in the future).

The rouge chickens had already scattered the straw on the first bed within an hour of my having mulched it, so I came up with this (hopefully workable) solution to their depredations: I laid lengths of snow fence over the top of the rows, using the variety stakes, as well as a couple end stakes, to anchor it in place.

As you can see, there’s a lot of fence roll left over that I might clip off and use…as actual snow fence. It’s not like it works as chicken exclusion fence in an upright position (my tomatoes and I sadly learned this summer), though maybe after a winter of snowy drifts the pullets will have put on enough heft that flying over the top won’t be such an easy feat. Remind me to never again pick a breed of chicken described as “perky, sprightly, and energetic.” What they mean is, “flighty, wild, and prone to escape.”

The garlic planted, we did manage to get away for the afternoon–an invitation to a five-course Slow Food meal at Moonstone Farm is really not a thing to be dismissed. A little clean-up, and a little preemptive ibuprofin for the road, and off we went to wine, dine, and converse with friends, coming home just as the chickens needed shutting in for the night.

There’s a lot more fall prep to be done in the gardens–a lot more clearing and compost-spreading and bed-prepping, some of which probably won’t get done before the snow falls and the outside work abruptly changes to winter chores. It’s tempting to say that now that the garlic’s planted, the rest of it is all gravy–but it’s probably more like the side dishes to the main course–or courses. And like the meal we enjoyed today, all of the courses contribute, and are meaningful to the whole.

Still, there is a satisfaction to getting the thing done, and there is a sense of commitment, of continuity and increase, in planting a more bountiful crop this fall than last, and in ground that next summer will yield even more sustenance to our family and our community, as well as more seed for the fall planting.