I must confess. I’m a lousy hermit. People have even accused me of being just the opposite. An extrovert. A social animal. Someone energized by crowds. A man who shivers with fear of being cast aside, of ever being alone!

Another confession: As I aged my life as a night-prowling animal has also changed significantly. Now I’m decidedly a morning person with sunrises as my goal rather than challenging myself to a Herculean effort of making “last call.” Loud music has given way to prairie winds; delicate Prairie Smoke looms above the glittering crowns of barroom goddesses.

All of which places me squarely in a yin/yang situation. Someone has suggested that this Stay at Home Order has the potential of making me seem a “caged animal!” However, the “yang” of my “yin” is the nearby prairies and woodlands where we’ve been given governmental license to go to ease the mood. The skies, too, have blessed us recently with a steady flow of geese flybys. Nature has come to my (our) rescue.

Oh, but the skies … blessing us with a steady flow of geese flybys.

Nature has long been a refuge. I grew up fly fishing farm ponds for largemouth bass and bluegills, hiking through nearby woodlots and horseback riding over the hills on our farm. Nature excursions have never been too distant. Back in my young professional life friends wondered how I could fit it all in. Prowling the bars into the wee hours, yet being ready a few hours later for an outdoors adventure. Looking back, I also wonder. Maybe I began maturing. When I moved to a publishing position from Colorado to Minnesota, which caused some friends to also wonder, I rediscovered country living. First along the St. Croix River, then the Little Vermillion River across a highway from the Prairie Island wilderness with close access to that beautiful little river.

With time and further change, and not necessarily of my own calling, we ended up in the flat Minnesota prairie where I ran a small country weekly for twenty plus years. It was 23 years ago this month when fate introduced  me to the ghosts of what Missouri author William Least Heat Moon called “PrairyErth” ­—  a friend, then the chief of our small town’s volunteer fire department, asked if I wanted to take a short flight with him to assess the flood waters inundating our small towns. It was on this flight that I noticed hundreds of pockets of standing water as far as the eye could see that I hadn’t seen before … sometimes several in a single quarter section. 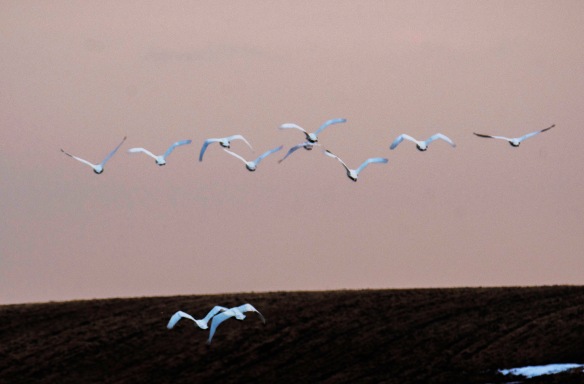 Among the varied species of geese were numerous Tundra Swans.

“Wetlands,” said the fire chief. “Those are all drained wetlands.”

That was the moment when I realized there was an ecosystem here that was no longer. Less than one percent of the native prairie remains, and much of that is replanted like mine here at Listening Stones Farm. Fewer of the “potholes” or wetlands the glaciers left behind remain due to ditching and drainage tile. These are the  “ghosts” of “God’s” creation of earth you see here in the former prairie pothole region during a spring melt.

This is the back story of our rather secluded life here on a “pinpoint” patch of that glacial creation. This is where we reside now in our third week of pandemic shut down. Truthfully we have been basically homebound since Mary’s knee replacement, so, yes, we are maintaining the mandated social distancing. 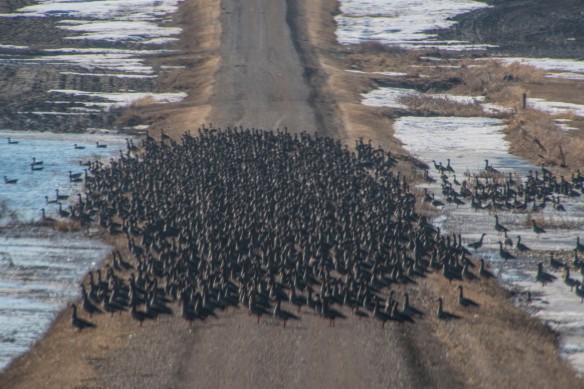 Social distancing wasn’t in the plans for the Greater White-Fronted Geese that blocked a “minimum maintenance” gravel road near here.

Not much has changed going into this hopefully short period of self quarantine. Friends returning from their winter sojourns to the south are immediately going into self-quarantines themselves, so there are no man hugs (nor woman hugs, for that matter). Our few social moments find us standing a good distance apart. Which in this region of the prairie, settled mainly it seems by American-Norwegians, social distancing is a rather traditional sociological trait. Even in more typical times folks stood about ten feet apart looking up at the sky and discussing the weather.

Oh, but those skies! Look into those skies! Here we have seemingly constant waves of Canada Geese skeins. A bit further east we’ve seen huge flocks of Snow Geese in their multiple phases, along with the Greater White-Fronted Geese. In our efforts of social distancing we’ve been chasing a huge flock of both species several miles east of here.

Swans and several goose species congregated on a “ghost” of the prairie past, a wetland recharged with spring runoff!

For this confirmed extrovert, this safety in social distancing has been both satisfying and tolerable. We have not been isolated from one another, and indeed, I feel we may have even grown closer together in this shared intimacy of caregiving. Mary, the introvert, and me, the extrovert, along with our shared senses of nature and the bounties offered even in this strangest of times for mankind worldwide.

In his book, Blue Highways, Least-Heat Moon wrote: “With a nearly desperate sense of isolation and a growing suspicion that I lived in an alien land, I took to the road in search of places where change did not mean ruin and where time and men and deeds connected.”

“With a nearly desperate sense of isolation and a growing suspicion … I took to the road in search of places where change did not mean ruin and where time and men and deeds connected.”

For us, down the road wasn’t all that distant. It was touchable in our isolation, and comfortable in its remoteness, offering to us a sense of nature that life continues without us … despite us. That we could share in that for even a few moments brought calm to souls now challenged with change we cannot fathom, an uncertainty for mankind health wise and otherwise in ways we cannot comprehend. We can only hope this change does not mean ruin, or even death, and that in time, man and deeds will once again connect.