You realize just how fortunate you are when you can consider Great Blue Herons as a bonus. And, yes, this is what happened on a recent trip to Rockport, TX, with fiancée, Mary Gafkjen. Our goal was to be up close and personal with Whooping Cranes, which came together better than even the captain and guide of our birder launch could have anticipated. The Herons happened next, and totally by chance.

After our launch and lunch we stopped at an artist’s studio where we both became intrigued by a painting class that was in session. On the wall, though, was an halting painting of Great Blues rising above an interesting mass of treetops. I couldn’t escape the beauty. 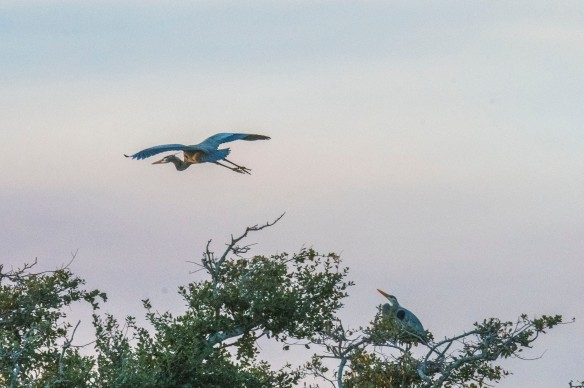 The Herons seemingly flew into and out of the rookery at will.

“That,” said the artist, “was my interpretation of the rookery down by the bay.”

“Near here?” I asked excitedly.

“Yep, and the Herons are here now,” she said, and promptly gave us directions to the rookery.

That’s where we headed next, our first of several visits over the course of a couple of days, including sunsets and sunrises. Great Blues lend themselves to the muse and imagination of artists in nearly every culture. Interestingly, about a week later we would be in my brother’s family room/porch in Richmond, VA, where he had a large framed print of the iconic John James Audubon painting of a Great Blue. Yes, the classic, the same one engraved on the wooden greeting sign at his Oakley House outside of St. Francisville, LA. It was there years ago that we learned that Audubon’s painting were typically portraits of dead birds, and yes, this one appears to have a flattened wingspan common to one laid out upon a table.

The afternoon light was nearly perfect.

One of my favorite paintings was by local artist Deb Bates Larson that she displayed at a Meander years ago. She eventually had a clothe bag made for me bearing the painting. There are so many, including the one by the Rockport artist. Although I have photographed Great Blues in the past, I have yearned to join the crowd. To have images kissed by moody light. The Rockport Rookery would give me an opportunity.

So it began, starting along the beach of the bay using a long lens and simply sitting there watching. We returned a few hours later in the late afternoon light, when the bay had calmed. First I focused on the apex of the canopy, then on a solitary bird wading in the brackish backwater with pairs of fly fishers in waders. We had interesting cloud cover, although the sun was setting much further south of the rookery. Oh, but that light! Herons were flying in from different directions, and flying off the dense canopy seemingly at will. There were no desperate measures. Simply walking around looking for different angles and imagery, watching for incoming birds and watching the light. This as unlike the rookies dotting the Minnesota River where the birds are shy and jittery. Here they paid no attention to nearby human activity. It was wholly different ecology. 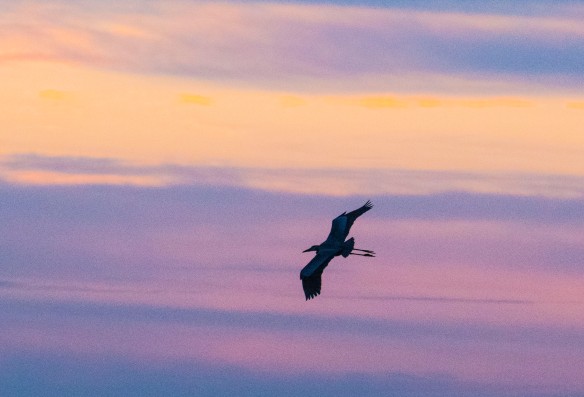 At these times your mind plays on memories. Of the Great Blues I’ve photographed rising from the cattails of  our nearby Big Stone National Wildlife Refuge, or one of my favorite of a Great Blue about to land on an old bridging peer in the flooded backwaters outside the boundary. Or the one that steadfastly refused to leave a wooden dock on Camp Lake as I paddled by in my canoe while fly fishing for bass one early morning.

I thought, too, of my late wife, who ignored the typical greetings of spring, that of the bouncing Robins in the lawn. For Sharon Yedo White’s spring began with her first sightings of a Great Blue rising from a prairie wetland, or one she had seen gracefully crossing the sky. In a way, I agreed. Spring or not, I am soothed by their grace and spindly stature, of their colors. That little black hood feather that wavers poetically in the wind. 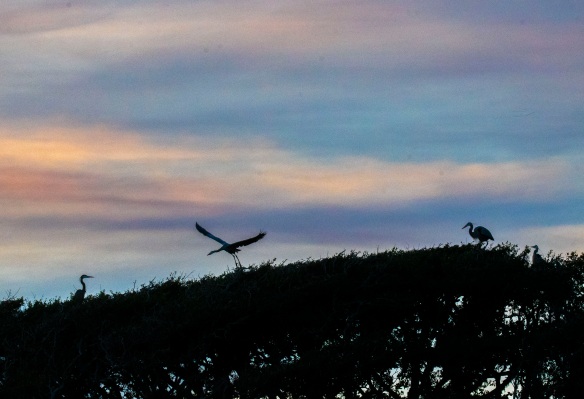 Now in the depths of winter, I guess I too wish a first sighting of a Great Blue rising from the wetland over the rise of my Listening Stones Farm, with warm memories of a recent Texas afternoon and sunrise morning.

2 thoughts on “A Rockport Rookery”