A fog lay heavy like a thick winter quilt over the prairie on a recent morning. Beyond vision in the depth of grayness, skeins of geese flew overhead creating spring music so dear to hear. Joe Pye pranced and sniffed with cautiousness in his discoveries, more dog than puppy, looking up often in search of the sound makers.

In the afternoon wind moved dormant bluestem and browned native prairie forbs and grasses from gentle sways to near violent gusty whips. Skeins are easily visible seen, and often several vees stretch at once across the sky with honking as loud as in the morning fog, though less haunting.

The “emptiness” of Rebecca’s gardening hat left on the sill of the “summer kitchen” with the winter prairie seemed like requiem for the relationship.

A friend wrote that she had seen her first Redwing Blackbird in a marsh about an hour south of the farm. Finally. Redwings have for years been my harbinger of spring. Although I feel the warming is too early, it is still welcome.

These brisk mornings give way to afternoons warm enough for little more than a long-sleeved shirt. There is a sense of freedom about not having to bundle up.

A road trip to the dentist allowed the crossing of the Chippewa River, which went from looking clogged with ice floes early this morning to a gurgling openness by mid-afternoon. Indeed, a quick hike in the fog this morning found plants dotted with dew, not ice, clinging tightly to browned arms. We are speaking of water now, not ice. Droplets, rivulets and puddles, like the river, free of icy hardness. 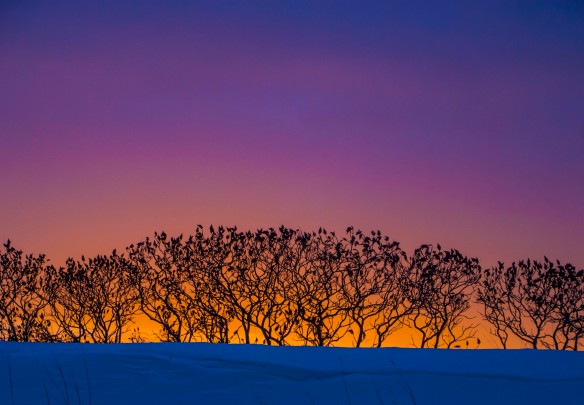 On the few times I was out, I was looking for gaiety and color.

Spring, the season of renewal, is nearly upon us. This sense of change is necessary as much personally as it is earth-wise.

It has been some time since I’ve bothered to write, with exception of the journal I sometimes scribble with my thoughts. Much has happened personally since my last post. Some readers are aware that my wife and partner, Rebecca, asked for a divorce in early January, and has since moved “home” to Vermillion, South Dakota. Her decision was shocking in that I didn’t see it coming, and was not a decision I desired. There is no need for detail nor a rendering of my emotions.

Simplicity and minimalism seemed to dominate the few images I made.

So I find myself, like earth around me, needing a season of renewal, of finding self. I’ve not been able to write much beyond the deeply personal scribblings in the journal. Nor have I had much desire to make photographs. As time eases along I can feel this spirit of creativity slowly returning. One might say I’m moving from the “whys” to the “what next” stage of the healing process, and in this uncharted personal journey this is a significant step.

This has not been a picturesque winter. I worry that perhaps this is on me, that I may have lost “vision” of the nuances and beauty of the prairie. Over the past week, though, I’ve begun carrying the camera more and even embarking on photo-specific road trips. Finding self is an interesting adventure, especially when you have felt so lost. They tell you to take one step at a time, and with that there is a healing. 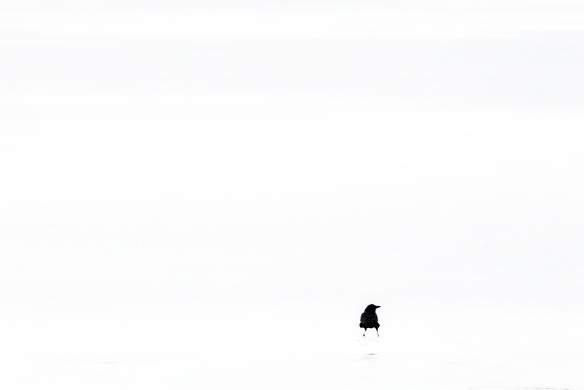 Some viewers read despair and sadness in this image, while some saw hope. To me it spoke of both, and of a world suddenly empty.

Looking back over the few images I made, the themes are simple. Some are weighted by symbolism I felt at the time. None more so than that of a crow on ice. Some say the image seems full of sadness while others have spoken of the hope it shows. I can see both, yet for me it symbolizes the sense of loneness in a vast unknown.