Much to my surprise and appreciation, my work was accepted as part of the 2014 Upper Minnesota River Meander Art Crawl … simply known as “the Meander” in these parts … for the first time. Long a supporter through my writing and photography while running a small town weekly newspaper, I had visited the many area artists on the trail … and one year, when along with my sister, Elizabeth Ann Roeder, we made the effort to visit all 45 of those on the Meander.

Tomorrow is the next edition, as we termed it in the news arena. And, once again, my work is part of it. Ah, the anticipation! Yes, the annual Meander is this weekend and like the other artists on the tour, those mixed feelings of anticipation, fear, wonder and delight join in a strange brew within the soul. Will the tourers like my work? Have I framed the right images? Do I have enough of the smaller items they will want to take home? Will I sell sufficient canvases to really make the effort worthwhile? Will the weather hold? 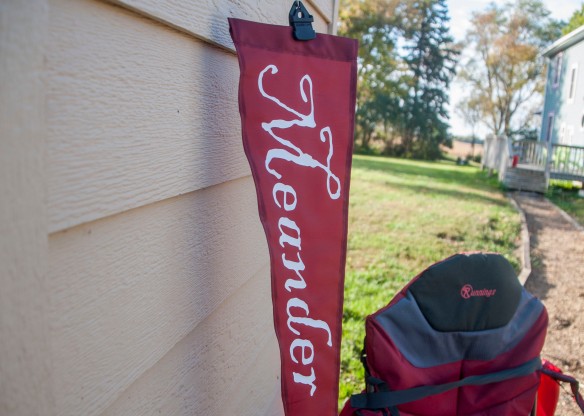 My banner is up! Too windy today for the balloons!

Last year was my first participation on the artist side, and it was hugely successful both in the numbers of people who came through our house and in the items they purchased. With that first one under the belt, a strange sense of calm comes through. Yet, the questions remain. Like most of the artists, over the course of the year we have added a wider variety of photographic art from my prairie images. The Meander is always a huge gamble for the artists. Like our neighboring farmers who are almost done putting their soybeans in the bins and have started on harvesting their corn, the Meander is our “artist harvest.” This is the weekend we work toward through the year in preparation for the hundreds of visitors we hope will come through our studios.

And, this will be our first attempt at an overall farm effort. Besides my artwork up in the loft, Rebecca’s hard work from over the summer will be offered as well … along with that of Gilda, Ruby and the “Henriettas” — those hard laying hens out in the pen … in both fresh produce and some canned goods. This, like we’ve witnessed with our dear friends further along on the Meander, Richard Handeen and Audrey Arner at Moonstone Farm, will be a whole farm effort! Many of my images were made here on our eight plus acre home prairie, so yes, it will certainly be a “whole farm” effort! 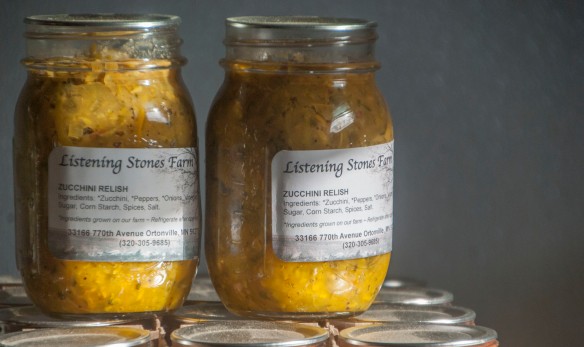 Among her many farm items, Rebecca’s relish is knock-out delicious.

Last year we opened our home for my Meander display, basically tying up our kitchen along with our dining and family rooms. Since most of the furniture was stacked in the office, our entire main floor living area was sacrificed for the long weekend. This was just fine until closing time. After the excitement was over and the crowds had left, we realized we had no real place to unwind. That Sunday night we scrambled quickly to put things back in order just to lay back on our couch and recliner to simply relax — despite the arrival of a couple of very late Meanderers!

This year we’ll be welcoming the Meandering crowd into our new studio and summer kitchen. Dale Pederson, himself a Meander artist, came with a crew after we worked together to design our new garage/kitchen/studio where the falling down original granary stood on the farm. That old building was a potential death trap, and I was a happy man when the man with the backhoe came to raze what was left of it after we had removed the usable “barn wood.” Our original plan was to have it up and ready before the Meander last year. It didn’t happen, of course. Three weeks after the Meander, Dale arrived at Listening Stones with his trailer stacked with the keyed components for a timber frame building.

One of the overviews of the studio loft created through the artistry of Dale Pederson.

I could easily visualize the ground floor where the garage stalls and summer kitchen are now located, but the upstairs loft was a complete mystery. Dale, and Mike Jacobs, both told me how much space and beauty we would have once the building was complete. Honestly, though, I was totally shocked when I began sanding the floor for varnishing. We had collectively created a serene and beautiful space. Since then, little by little, the studio loft has come together. Early in the summer, following the Brookings art show, my wall-mounted display panels were moved up to the studio where my framed prints were hung.

My newer wire panels were then moved up where the canvases are now placed. Since then a work table was built for matting and working on my prints. Then an “island” console was built around one of the foundation beams where I can exhibit my calendars and cards. I also built a bookcase, although it won’t be ready for stacking books before the weekend.

Hanging the work left over from the last Meander was quite helpful, much of it now replaced with new images. At least 80 percent of my  framed prints are new, along with several new canvases. Also on the walls are several smaller framed prints along with eight recessed and floating metal prints I’m experimenting with. This is an idea gleaned from an earlier show by a glass fusion artist this spring. 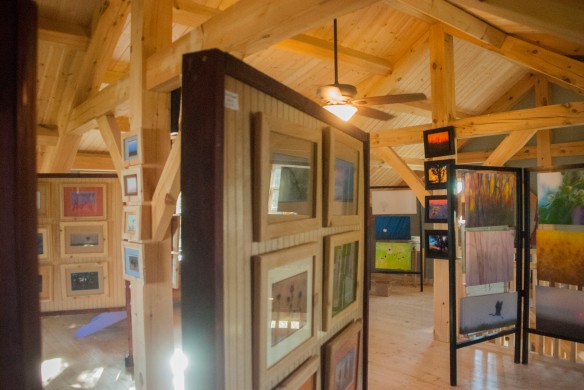 Having a separate space for the crowd will no doubt make the Meander even more enjoyable for us this year.

Also new this year will be series of six posters that join my images with poetry written by regional poet Athena Kildegaard, who has published three books of poetry with a fourth scheduled for this winter. We are all extremely excited about working together on this project, and those who have previewed the posters have raved about them. 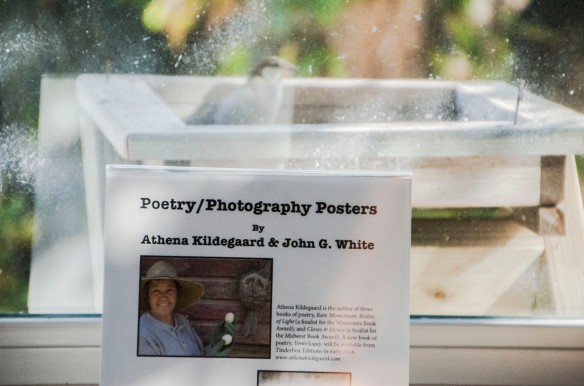 A visitor to the bird feeder, in front of the display of the new posters created by poet Athena Kildegaard and I.

Yes, this has been fun and creative year in the field, and many of my new images are part of my show at the Meander.

But, this isn’t just my show. A huge part of our “farm plan” is to mesh art with good, organically-produced foods from our Listening Stones Farm. Indeed, this Meander will be our first real shared venture, for which we’re extremely excited. If by any measure I can be considered as artist, rest assured that my efforts pale alongside Rebecca’s. So much goodness, all grown from the heart. We are now on the “eve” of our “artist harvest,”  And we can hardly wait (despite that natural anxiety) for all those folks who will make the effort to venture up to visit our farm during the Meander. Hopefully they will have as much fun as we will!

1 thought on “Our ‘Artist Harvest’”