Call it maturing, or perhaps a sign of graying, for among the “life” things I’ve discovered is that it is more fruitful if not more relaxing to solve the world’s problems in the bow of a canoe rather than on a bar stool.

More evidence of that realization came Sunday while mixing a little catfishing with canoeing and bird watching on the Minnesota River with long-time friend, Tom Cherveny. Although our put-in at Kinney’s Landing south of Granite Falls was somewhat delayed with a misplaced tackle box, once we were on the river life and conversation seemed to ease right along with the natural flow of the passing waters.

Who could ask for more? Well, a stringer of catfish didn’t seem to hurt, either.

Although we weren’t serenaded by the continual blasts of Canadian geese, which is a somewhat common sound of the early trips on prairie rivers within the vast Mississippi Flyway, we had ample bird life to admire. Especially wonderful was watching the spiraling glides of the recently returned white pelicans high above us. Belted kingfishers traversed between riverbank perches, and an occasional eagle added interest to the paddle.

We skipped from deadfall to deadfall, anchoring in the deeper holes, dropping weighted and baited offerings to the depths of the muddy waters. One of the highlights of river fishing is not knowing until a hooked fish breaks water alongside the canoe just what you might have on the line. Besides the tasty catfish, we also brought into the canoe several carp of various sizes, buffalo and freshwater drum. “We should smoke these,” we kept telling one another before releasing them back into the river.

Our trip just happened to mark the 20th anniversary of the 1997 flood, when waters kissed the treetops we were paddling beneath. Since I was busy doing stories and occasionally helping with sandbagging efforts on Hawk Creek, a tributary upriver of the Minnesota, Tom was covering the efforts in Granite Falls. As we passed the former Firefly Casino grounds, he explained the efforts the native Dakota went through to secure their homes and businesses.

We talked of subsequent trips we had made that spring after the flood waters had receded, of pointing out to others the rafts of grasses still entangled high in the treetops; of how canoers, especially exchange students, would look up at the high tufts then back down to the river, mentally measuring the differences of depth.

Oh, the subsequent trips. We have typically done a paddle not long after ice out. This year it was the first Sunday of March. We talked of fishing on that trip since a young friend had told me he had been catching channel cats all winter long due to the rivers being open.

Earlier trips are often referenced on our paddles. One I’ll never forget was several year ago when I took my kayak and Tom paddled with his son, Eric. The Minnesota was particularly high that day with a massive and dangerous  backup of waters from the Granite Falls dam … for several miles back upriver. I’ve never been so frightened. Not before, nor since. The river was a mass of spinning whirlpools, and my only motive was to paddle from one whirlpool to the next without spilling, keeping the bow headed as straight downriver as possible. A misplaced paddle causing a flip in that churning water would have been disastrous.

Another early season trip was more fun, one in which we recorded both photographical and written reports on the state of the official DNR Minnesota River designated camping sites from north of Montevideo down to Frederickson’s, an island just above our pull-out on Sunday. At the first, which was overgrown in buckthorn and a fire-pit mounded with siltation, we found the skeleton of a deer that we surmised had hidden from a hunter only to die of wounds within a “fort” of buckthorn. I retrieved the skull that hangs here in my office. Between Churchill Dam on the Lac qui Parle Lake down to Morton there are five such designated riverine campsites, at least two found on remote islands. Our reports were logged before the 50 year anniversary of the making of the campsites so crews could do the cleanups and necessary refurbishing.

Not unlike the barstool conversations, our conversation treaded on politics, issues that created the incredible siltation of the river, chiding while offering encouragement of a catch, pointing out wildlife and bird sightings to one another, and so on. As we neared our take out we passed the third such campsite, then pulled between two deadfall for our final dunking of worms. As we waited rain began to fall. Off to the west came the intermittent roar of thunder. 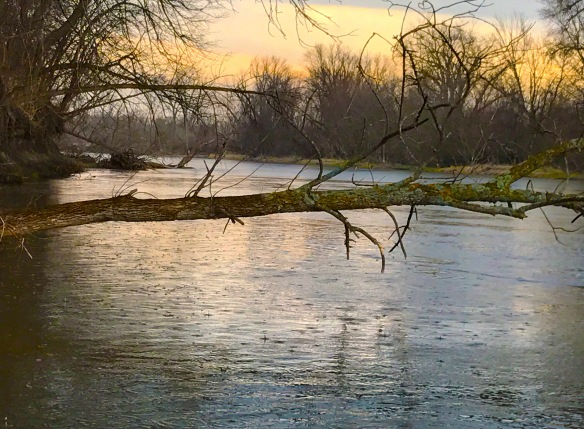 We caught a few more fish, and watched the skies. Finally we reeled in and padded a few hundred yards to the take out. Moments after we were out of the canoe and on dry land, lightning suddenly broke through the clouds just above us. It was still better than a bar stool.