Yesterday I was thinking about Tuesdays, which for a long number of years were “headache” days. Tuesdays were deadline days of my country weekly for 20 plus years. Tuesdays nights were city council meetings. Before that Tuesdays were years of nights on the road when the excitement of yet another business trip had waned and Friday seemed so far away from flying home. Lest I not forget, for a few years Tuesdays were men’s bowling league nights, a sport I tolerated because of friendships, cold beer and an occasional strike.

So where was I this past Tuesday? Cocooned inside my pop-up “outhouse” photography blind on the edge of a wetland in the Big Stone National Wildlife Refuge listening to the first of the spring peepers, watching an industrious muskrat working a raft of cattails, waiting for ducks to not just fly in, but edge closer to within camera range. Perhaps most of all, simply enjoying an intermittent warm breeze on a sunny afternoon as small, puffy clouds floated by on a palette of deep, blue spring sky.

There I sat with two unzipped windows facing the south and west as the sun made a slow passage toward the horizon enjoying both the solitude and my peaceful existence. Time for deep, unlabored breathing. Time for reflection. Time for nothing but waiting and watching. Time on a breezy and sunny afternoon. 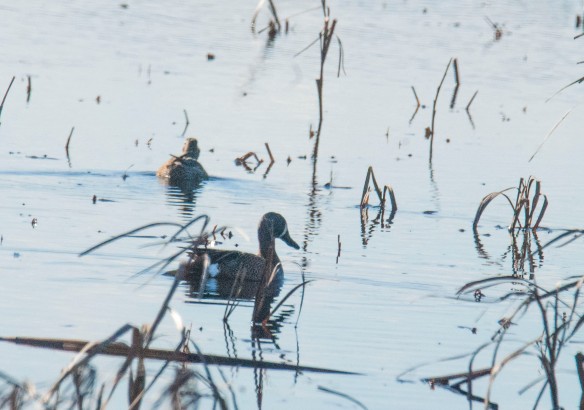 An occasional car would venture slowly around the bends of the auto tour road doing as I’ve done dozens of times myself since moving here. Windshield observations, and most of the time serving as a “movable blind” with the camera at hand.

At the distant southern edge of the wetland was where it seemed the ducks congregated, and as I’ve seen from behind the windshield, as soon as a car approached all pushed frantically away from the road or burst away in flight. Once in the air they flew west away from the road before turning back to fly high overhead toward the dammed backwaters of the Minnesota River, only to circle back and glide back into the same pool moments after the car had eased safely away. Time after time. A cheap mystery solved.

Time made me wonder if my camouflaged blind was too tall, or too visible, or if the pool in front of me was too shallow. Often when placed in the woods it takes a long half hour or so before the sounds of nature begin to fully return; when squirrels and woodland birds ease fully back into nearby branches. Was it the same here at the wetland? And if so, how long would it take? In the hours that passed, little changed. Those ducks stayed beyond camera range. Refuge employee Jason Ballard had told me that putting up the blind was fine as long as it came down by the end of the day, or that I could do what others had done … create a hiding space within what nature offered on site.

Then an interesting moment came. Off in the distance came the sound of motorcycles. That broken muffler sound common to Harley’s. Due to the location of the wetland, in the valley below Highways 7 and 75, traffic noise for the louder vehicles melded with the peepers, especially that from the random motorcycle and semi. This was steadier and easing closer. As the sound neared, many of the ducks and a pair of geese rose from the waters in flight. Then suddenly two motorcycles appeared over the rise, moving slowly. One with a hard rock radio station blaring. One of the riders then shouted loudly to the others, “Isn’t it great being in nature?”

Ironically, most of the nature had flown away before they motored into view, although I’m sure the ride through the Refuge was blissfully beautiful on such a lovely Tuesday afternoon. To each our own.

A runner with his dog jogged along the distant roadside before passing behind me about ten minutes later. Earlier, not long after I had set up, a young woman on roller blades swish-swished by. I’d passed her as she was starting off from the parking lot just outside the entrance gate and was amazed in both the distance she had covered as well as the speed in which she had done it. Interestingly, the distant ducks simply skirted further from the roadside when both the roller blader and runner passed by. Observations on a breezy and sunny afternoon.

To break those occasional moments of monotony I raised the camera to take photos of the ducks flying over on those frequent escapes, or the shimmering sun-fed glaze of the pool in contrast to the silhouetted swamp grasses. I had watched a distant eagle float in invisible towers of air currents over the distant native prairie. Then there was my buddy, the muskrat, who wasn’t shy about his frustration and disgust in not being able to climb aboard the floating mass of cattails right in front of the blind. Oblivious to my being there, it has swam and dived around in front of the blind for much of the afternoon.

My initial plan was to sit until sunset, which would have been another couple of hours longer. Then, as I focused on another flock of ducks, wings spread in descent, lowering toward the distant waters, my camera battery died. Suddenly I was as frustrated as the muskrat. With a final deep breath, I stood to fold the blind and make my way back to the car. All told, though, it was a beautiful afternoon. An incredible Tuesday afternoon.

A time for reflection. A time for nothing but waiting and watching. Time spent on a breezy and sunny afternoon.

1 thought on “Bliss in a Blind”