Walking into the kitchen after a road trip to pick up pork at Pastures of Plenty for our local Granary Food Co-op reminded me of another prime reason for loving this time of year. Rebecca’s roaster of tomatoes and other vegetables were simmering down to make her signature Smoked Eggplant Tomato Sauce. So intoxicating! So autumn! 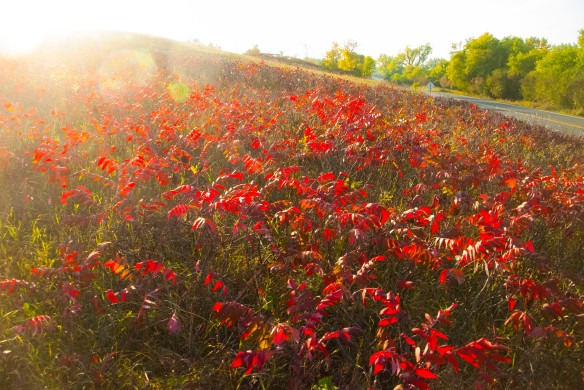 Sumac shines in the early morning sun just down the road, one of the sure signs of autumn..

Actually, just smoking the eggplant felt autumn-y in itself … although a couple of racks of ribs might have been even more appealing if not satisfying, with that curling scent of bluish apple wood smoke drifting away from the chimney. We are seasonal eaters, with exception of what we don’t can or freeze, so apple wood has become a staple. As have apples, the prime fall fruit along the wooded river hills around here. Cider. Apple sauce. Apple butter. Pork simmering in a curry with tart apple chunks. Ah, the joys of autumn!

Driving up the Lake Road this afternoon offered numerous signs of the changing of the season. Even in our yard, which isn’t all that close to water, the leaves are losing their chlorophyll, meaning of course, their greenness. We are a few weeks from the peak, yet when I sat on our listening bench in the loop of our grove last Saturday a constant sprinkle of crinkly leaves rained down around me. Although we are hundreds of miles from real woods, there was the smell of a fall even in the grove timber. A crispness. A crinkling, dry feeling. With sunlight filtering down through the canopy. Then, unexpectedly, a wren … small, nervously alert, and beautifully brown, like those dried leaves … flitted onto a nearby branch. Ah, autumn. 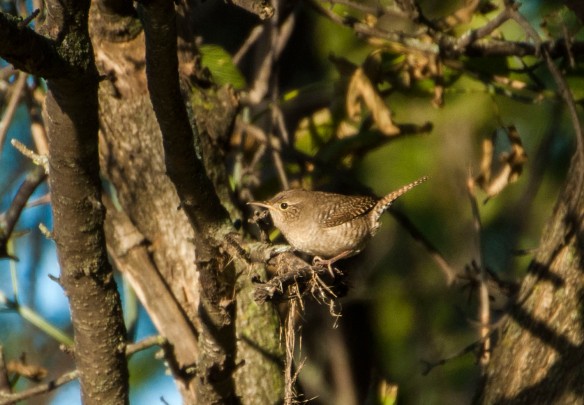 The little wren popped up amidst the sprinkling of leaves in the grove.

On the prairies around us big bluestem and Indian grass are browning, and those clubbish, naked seed heads of cone flowers defy the prairie winds that give the grasses their freedom of beauty. Golden rod is starkly peeking through the brown. You will likely not find a better time to stroll through a grassy prairie, wading through this dance of autumn as a staunch breeze batters you from the side. I wish I could hear better, to perhaps hear the subtle rustle of the blowing grasses.

Just above the grasses you’ll still see a few dragonflies, although those sweeping, acrobatic swallows have departed. Last year their leaving was much more dramatic. I had been working in my wood shop, which is in the former goat barn of the previous owners, and the swallows had been after me all morning. Buzzing in and out, sometimes swooping within inches of me above the saws and the router in their daring-do. That afternoon the barn was abnormally and noticeably quiet before the sudden realization that the swallows were gone. In a heartbeat, perhaps, the signal had passed among them that it was time to go. To migrate, that great innate passage and mystery science is still trying to unlock. 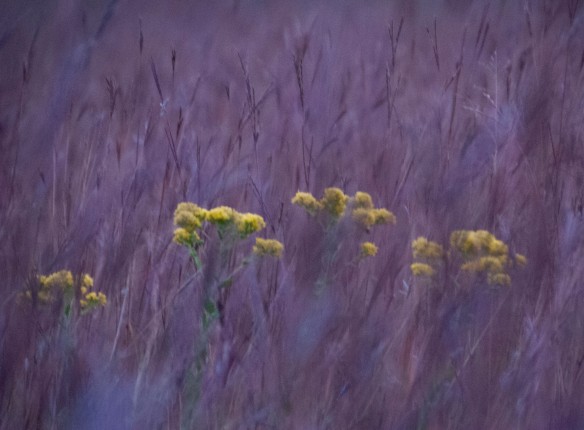 Golden Rod peeking through the big bluestem on a recent pre-dawn morning.

This fall, though, they flew away without so much as a morning of pronouncement! Just disappeared as abruptly and mysteriously as they so suddenly appeared back on that warm, May afternoon. So, no, the swallows are no more, and the few insects out over the prairie grasses are being seized by those dwindling squadrons of dragonflies.

One early morning this week we both stepped onto the deck off our kitchen with our tea and coffee to an almost eerie hum. It was loud enough that we were sort of looking at one another in question when a sudden “swoosh” erupted from the grove as a murmeration of blackbirds rose in unison from the treetops. Hundreds. Perhaps a thousand. You can’t count a murmeration. Last fall I had posted a picture of a nearby rise of the blackbirds from an oak savanna down the road and an old friend wrote, “I’m so glad you now live out here and can see these things.” Of course, she was right. In talking with people my age who grew up before that last great ditching and tiling of the prairie pothole region in the 1960s, back when there were enough prairie potholes of significance, they reminiscence of murmerations so thick of birds that the sky was blocked by a canopy bird blackness. I’m not the only photographer who has recorded a ribbon of murmeration blackness, and certainly not the only one who can wish for experiencing such a moment from the past … one that will likely never be no more, one mankind has erased from the earth forever.

Thousands of blackbirds rise from the trees … a murmeration.

Although our neighboring farmers with the pothole wetlands planted corn this year, which now block our views of those wetlands, we can still hear the geese as they begin to gather. A month from now along with the dust of harvest the skies will be full of the sounds and skeins of geese as they seek recently harvested fields to gorge their gizzards before the last long flight of the year. Ah, autumn!

Moments ago we took our nightly mugs of wine out on the deck, and witnessed a small murmeration, the skittish flight of a few dragonflies, the distant honking of geese, and still another sign of the approaching autumn … a distinct chill in the air. A fall wind. Autumn was all there for the taking, for the filling of the senses. Now is a time you begin the morning with a sweater, then work off the layers as the sun climbs in the sky. Cool mornings, balmy afternoons. We call this an Indian summer for some reason.

Our windows are open at night allowing the breezes to caress us with coolness. While it is still warm enough not to send chills down your arms and legs, you awake in the morning realizing that at sometime during the night you must have unconsciously reached down to pull up a quilt; that you had snuggled deep into the warmth of the bed and up against one another.