A few weeks ago a friend wondered why patches of established prairie were set ablaze each spring. She worried about the birds and animals, and hinted this seemed such a waste of time and energy. Her question came shortly after she had attended an Earth Day Celebration at Prairie Woods Environmental Learning Center where visitors were greeted with an amply charred hillside as they turned into the facility.

Yes, it could have been considered ugly … unless you had an understanding of the process and reasoning.

A controlled burn a few years ago on a Renville area prairie lit the night sky.

Thankfully I have many who have helped me with both, beginning with Audrey Arner and Kylene Olson. Several years ago, just as I was in the early stages of gaining an appreciation for this last one percent of native grassland, Arner hosted a prairie walk on her Moonstone Farm in early July on a small patch of prairie that had been torched just a few months earlier. We rode a hay wagon from the house to this nearby field that was lush with growth. This wasn’t a “tired” prairie. Thick prairie grasses provided ample carpet and support for the prairie forbs popping out all over. A common question among we visitors was, “You really burned this land this spring?” As the group waded through the greenery, Olson, executive director of the Chippewa River Watershed Project and a prairie plant specialist, provided identifications of various grasses and flowers, and she gave us all an education on the beauty of and the aftereffects of the burn. At one point a rare butterfly appeared, fluttering through to land on bright orange blossoms peeking through the greenery.

Few of us recognized the butterfly, or even knew it of its endangerment, which like the formerly ever present prairie chicken, is due to the loss of prairie habitat. Yet the reaction of Olson and Arner in seeing it flutter from flower to flower was just as intriguing as it was exciting. Indeed, the entire experience was enlightening, as if an entirely new world had opened up. Well, in fact, it had. 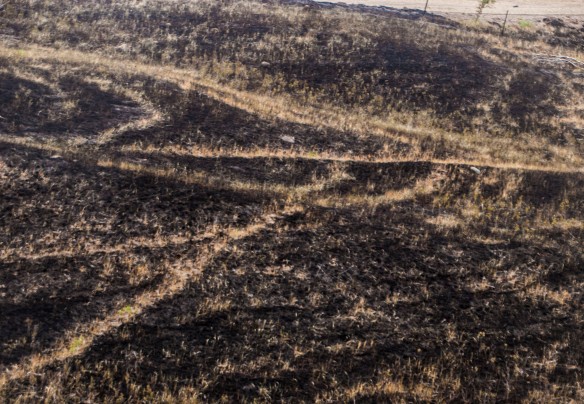 Reminiscent of the ancient Peruvian Nazca “air strips” are the game trails revealed on this recently burnt prairie.

Among the others who have helped with this journey of education were Tom Kalahar, now retired from the Renville County SWCD; Kurt Arner, Audrey’s brother and a long time fire crew member; and Dennis Pederson, who for years headed burning crews for Pheasants Forever in the Upper Minnesota River watershed. This journey of discovery basically coincided with the beginning of the Conservation Reserve Enhancement Program (CREP) that restored a few thousand acres of prairies and wetlands to the former prairie pothole biome. Kalahar was instrumental in evolving that program in Renville County, and would switch over to “personal time” as a frequent prairie fire crew member. The three kindly called to tell me of a planned fire, and Pederson and Kalahar, in particular, spent much quality time in explaining the cautions taken and the reasoning behind the timing.

Wind speed and direction, location, optimal burning conditions, and nesting seasons were all key in their burning decisions. If conditions were wrong, a burn was called off. As for the animals that make a particular prairie their home, there is ample time for escape to safer pastures and nearby groves.

Burning a prairie is all about the soil and the native prairie plants. A prairie is often described as an upside down forest due to extensive root systems which not only anchor the plants in the soil, but also creates an entire soil-based ecological environment and allows for the storage of often limited water resources. Those same roots allow the plants to withstand the intense heat of a searing prairie fire. Since prescribed burns typically are planned in the spring, the brown duff and leafy matter are dead and useless to the plant. Before Euro-American settlement, when tillage, ditching and later, drainage tile, converted the vast millions of acres of natural grasslands to fields for commodity crop farming, prairie fires were mostly a natural consequence of nature. Lightning set most of the fires, although fires were also set by Native Americans to refurbish a prairie to attract wandering herds of buffalo.

This poster shows how roots from native prairie grasses and forbs run deep … creating an “underground forest” that allows them to survive the surface fires.

“Refurbishing” is the key word. Over time that duff and dead leafy matter cause prairies to become clogged, or bogged down, choking out more and more species, especially perennial forbs and flowers. With the ash adding nutrients, and with choking duff burned away, dormant seeds and freed roots are given new freedom to sprout and flourish. Grass species seem flush with more vigor, too. Besides this regrowth, there is another benefit. Fires also help reduce invasive wood species such as Eastern Red Cedar … which, if you’ve visited the area around and south of Granite Falls, you will notice acres upon acres of the small evergreen trees that have completely overwhelmed the prairie grass hillsides. 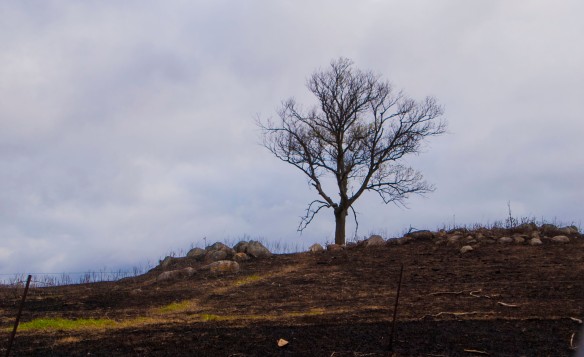 A lone tree after a recent prairie burn …

… and later, the greening prairie emerges.

A friend with a beautiful prairie near Montevideo complains, however, that recent fires did little to stop a cottonwood invasion in her grasses, although we are anticipating a fire on our prairie will hopefully put an end to the weedy elms that are thick in patches. Students of prairie ecology know, too, that burr oak, which will cluster in savannas on the shaded northern slopes of native prairies, escape damage due to deep rooting and thick bark growth.

An oak savanna on the lip of a refurbishing prairie that was burned earlier this month.

In reality, we have an eye on a prescribed burn here at Listening Stones Farm. We’re at least two years out from our first burn, yet Rebecca mentioned a “window” for planting specific native flowers she hoped would have ample time to set root before a necessary  burn. “Next year will be too late,” she said when returning with her digging trowel. Having a native prairie is a moveable feast of nature, for as yellow as our eight acres of prairie was last summer, we haven’t a clue what to anticipate this summer … or the next, or even in the year following that when we expect to do a burn.

It’s fun and educational to watch a controlled prairie grass burn. Thanks to their kindness, I’ve watched these professionals at their craft, and I’m still amazed at how well they do their work. It is perhaps more of an art than craft, for after a burn you can see how they have completely contained their burn area, working delicately around homesteads and fences right down to the “nth” degree with back burns and fire breaks. We can see evidence of their “art” just down the road from our farm, where odd shaped, long neglected prairies were burned for the first time in many years these past couple of weeks. Driving past the charred hillsides has given me renewed respect for their precision and work. One of those fields is already flush with life in ways we’ve not seen since we’ve lived here.

It didn’t take long for this burn to green at Prairie Woods Environmental Learning Center in April. Notice how the burn sweeps around the remaining, unburned prairie to the right.

Oh, and that patch of burnt prairie at Prairie Woods ELC? A few days after her comments I sent her a picture showing the greening on the charred hills that had caused her questions and concern … a greening that came within days of the initial burn. 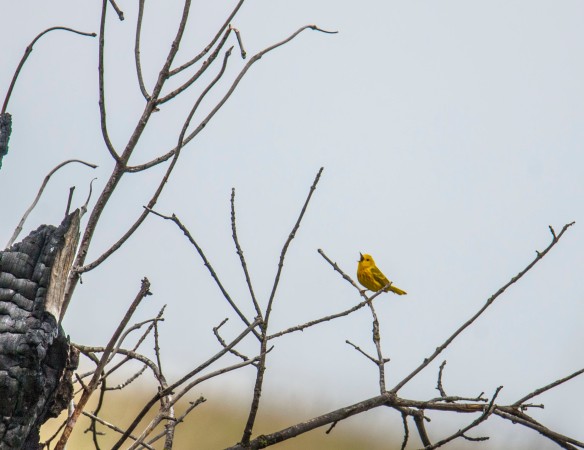 A Yellow Warbler sings on a charred snag from a two year old burn at the Bonanza section of Big Stone State Park … life from the fire.

Her reaction isn’t unique, for like most of us alive today, the millions upon millions acres of native prairie was gone long before she were born. Indeed, less than a percent of the original prairie remains in one of the most thorough conversions of a natural landscape anywhere on earth, all within less than a century of human settlement. While prescribed burns may seem harsh, in reality these fires are breaths of fresh air to the ancestral plants native to our land. From such fire comes life.