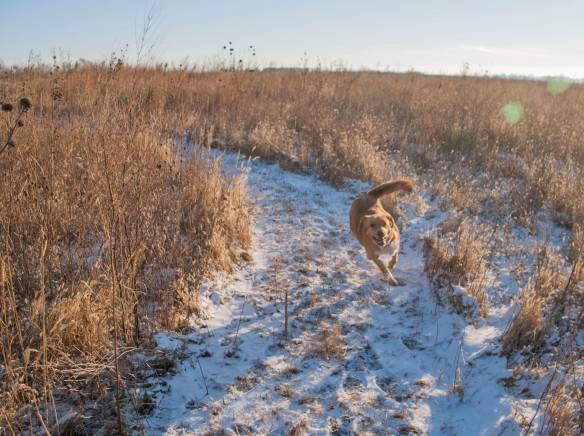 Joe Pye loves to run the paths through the prairie.

In an earlier writing I told of how on the eve of our first snow of the winter, Rebecca worked feverishly and successfully to remove the tillage attachment and to install the mower on her “new” garden tractor. As darkness approached, she headed into our eight-plus acres of prairie to mow a meandering path through the grasses and forbs. More than once since she has jokingly been accused of mowing the path in a state of inebriation.

What a beautiful path, though. It loops and connects, meanders and traverses, and even intersects with the farm site in a few strategic places.

That winding path has now become a focal point thanks to adopting our new mutt, Joe Pye. Twice each day since, we’ve taken Joe Pye and Vega, our resident “hound,” on exercise laps on Rebecca’s prairie loops. We have our “upper” prairie on the northern portion of the farm, which begins at the foot of the orchard and winds around above the grove; or the “lower” prairie, which is mostly below the farm yard and main garden. Naturally, she connected the loops between the upper and lower prairies. 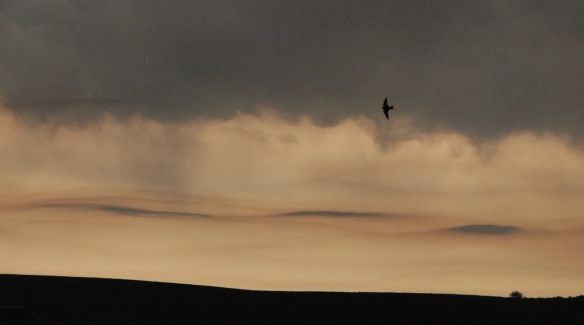 Watching the swallows above the prairie was a treat all summer long.

The loop paths are giving us both a good excuse for exercise and fresh air, not to speak of giving the dogs a good airing out. It was on one of those walks that Rebecca asked, “How do you think our prairie will look next year?”

“I haven’t a clue,” I answered. My response came from experience and from a comment made by dear friend and prairie addict, Kylene Olson, executive director of the Chippewa River Watershed Project, and who is also a Master Naturalist and winner of CURE’s Riverkeeper Award. Years ago, during the first full bloom of my backyard prairie garden in Clara City, I invited Kylene over to help me identify a few plants and to give an overview of the effort. As we walked the perimeter of the prairie garden, she said, “You realize that no two years are ever alike. You have a lot of blues and purples now, but next year it might be dominated by yellows or with grasses. You never know from year to year.” 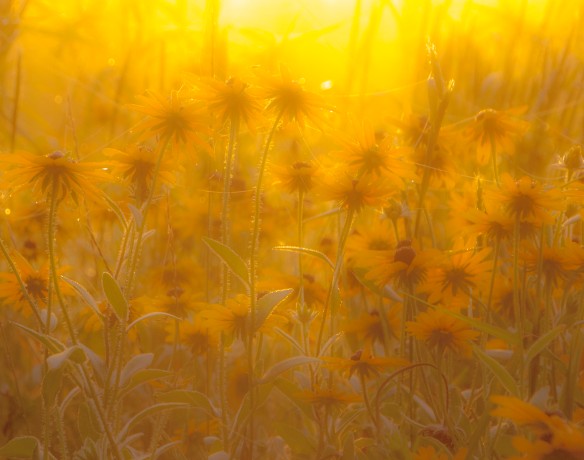 Enhanced by the early morning sun, the color of yellow dominated.

In the three years of the garden, she was right. No two years were ever alike. Since then I’ve noticed same is true of the various native prairie patches around the area. “Amy’s Prairie” near Montevideo was a collage of flower colors this past summer, while a year ago it was weak on cone flowers. Two years ago the Clinton Prairie was a carpet of Prairie Smoke late in the spring, while this past spring one had to search diligently to find a single cluster. The WMA located a mile and a half east of our farm had a great season for Big Bluestem in August, seemingly three times what was visible the summer before last.

It was on our first summer here that our prairie was planted. Most of what we saw through the first summer was a domination of pigweed and lamb’s quarter, certainly not desired species … yet they are the first transition species in an ecological plant succession. We were told by the SWCD and Pheasants Forever, who worked together on the planting, not to worry, that the prairie was coming along quite well despite the pigweed jungle. “No two years are alike,” said the SWCD man. There it was again. 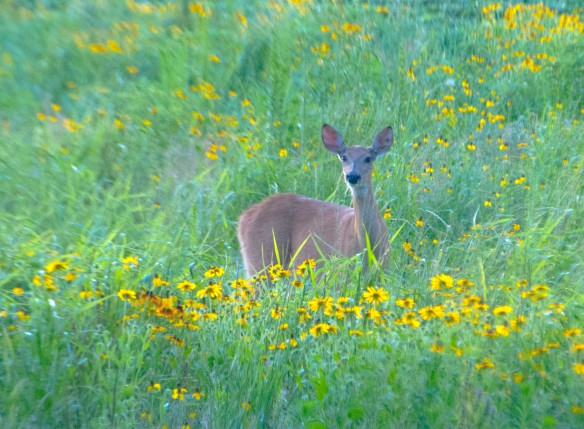 More than once we spied deer in the prairie.

This past summer, in our second year, the prairie was dominated by yellows and very few grasses. Every blooming flower, and there were seemingly millions, was a bright yellow. At first it was delightful since it wasn’t pigweed. By August the entire prairie was a carpet of yellow, one you couldn’t miss coming up over the hill at the end of the section. While I hesitate to suggest that we grew tired of yellow, we went on several high-stepping missions through the dense foliage, and prior to the cutting of the paths, in search of anything suggesting a different color. We did find a sprinkling of Purple Prairie Clover and a few Bee Balm plants. In fact, Rebecca believes we’ll have a healthy Bee Balm crop on the upper prairie next summer because when she went up there last fall to transplant some she started from seed, she suddenly spotted them everywhere!

That anticipation of change is one of the beauties of having a prairie. Another is seeing the prairie come to life. Many hours were spent watching the acrobatic flights of swallows over the prairie surface all summer capturing insects drawn to the plants. Come autumn, murmerations of starlings and various blackbirds came to feed among the seed heads of the coreopsis, prairie sunflowers and coneflowers. We have surprised deer, including the flushing of a fawn in early summer that bounded down into the lower prairie flashing its telltale white flag of distress. Butterflies made their appearances, too, and we were so thrilled with seeing monarchs that Rebecca made a concerted effort to spread more milkweed seeds into the grasses. 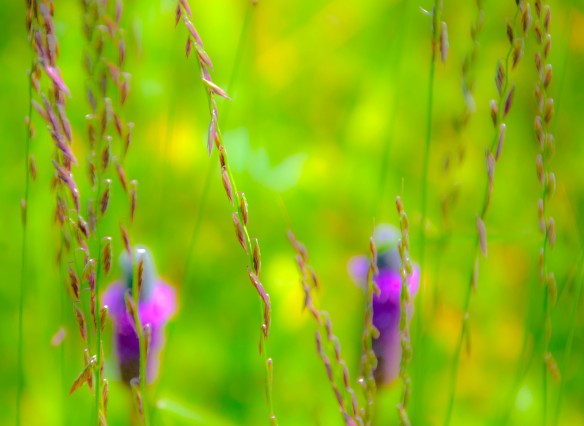 Side Oat Grama is emerging, and is seen here with a couple of Native Purple Clover.

Nightly we hear coyotes, and although we suspect they’re somewhere in the prairie, we have not seen tracks even after a snow. Those nightly yips and howls take over the late afternoon “barks” of pheasants. Last winter we had a resident rooster who seemed to strut from the prairie into one of our lilac “islands” every late afternoon. On one of our recent walks with the dogs we saw pheasant tracks in the snow in the upper prairie. No birds, though. A day or two later we finally flushed a hen in the lower prairie. We were thrilled, and perhaps even a bit smug in our self-congratulations when considering all the barren crop fields that surround us. 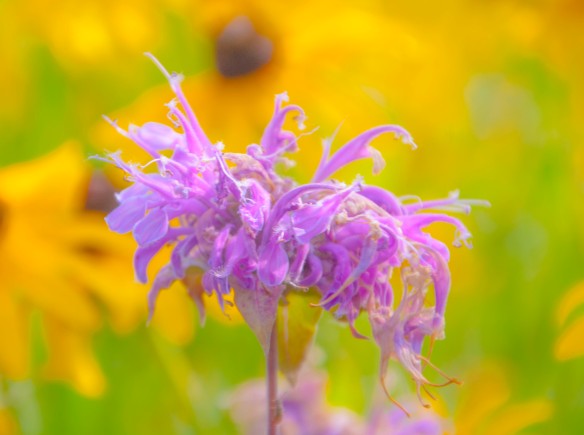 One of the few Bee Balm in our prairie last summer.

Yet, it is through the adoption of Joe Pye and Rebecca’s loops that we are becoming ever more familiar and intimate with our home prairie. We had a beautiful summer, as noted, and seeing it twice every day this winter as we move from the Solstice toward the Equinox will no doubt provide various observations of change. We’ll see if those Prairie Smoke plantings were successful as we move into the next greening season, or if Bee Balm will actually “explode” on the upper prairie. Maybe all the sprinkling of seeds “caught” in our pant cuffs after we returned from other native prairies will take root, along with the milkweeds.

What will our prairie look like come summer? Who knows? Yet, that is the beauty of our home being surrounded by a patch of prairie, even if it is restored rather than native. I like this idea of “we’ll see.”