A few days before the blizzard Rebecca walked along the edge of our prairie with her arms raised high letting the wind take ripened milkweed puffs from her hands to distribute them into the native grasses. Her gesture seemed quite symbolic of our finally settling in, although we’ve had many settling-in moments over these past few weeks as the light and warmth of autumn gave way to the ominous warning of our first blizzard of the approaching winter.

On the eve of the big storm she worked diligently through the day … often shooing me away because of the satisfaction of doing it herself … to remove the tiller from her garden tractor for the first time so she could attach the mower. Many trips were made between the mower and the wind-free inside of the goat barn as she consulted the owner’s manual to gauge her progress and to find the next step. It was late afternoon by the time she finished; by then the battery was charged high enough to start the tractor. As dusk gave way to darkness she was still out mowing a loopy path through the prairie grasses for us to walk, snowshoe or cross country ski without being covered with “preacher’s lice” and being tripped by the thick thatch of native grasses.

Rebecca’s path cut through our prairie the day before the blizzard.

Despite the hurried preparations, I doubt if either of us was mentally ready for the reality of the deep snow we now have for it is likely our winter cover until the spring melt. Couldn’t we have eased into this? Must we have had a raging blizzard blasting horizontal snow and leaving behind wind created sastrugis across the neighboring barren crop fields? Wouldn’t waiting until the timber frame building was completed been more reasonable? Asking such questions is futile, though excusable.

Blizzards, though, serve a good purpose in that you are given time for reflection, of which I’ll take advantage. 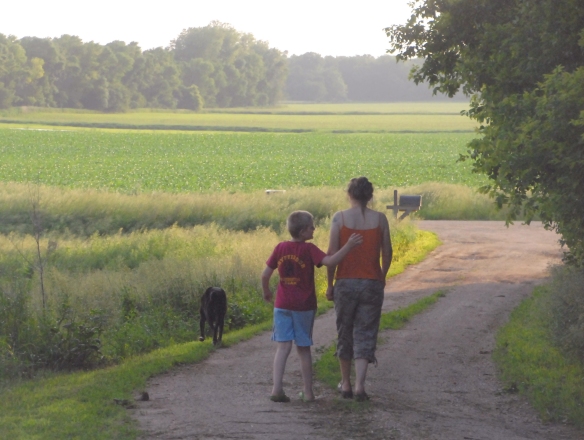 Rebecca and her son, Martin, have a quiet moment.

So begins our second winter here on the farm. Our first was one of nearly daily discovery of country living here at Listening Stones Farm and of learning the nuances of our new home. Seeing how our chickens would fare, and even the directional drifting of wind-blown snows. At this time last year we were razing two decrepit outbuildings as the first snow, a lazy and light snow by comparison, gently covered our prairie. One was a granary built at the same time as this house. Holes had worked through its roof as well as through that of an architecturally interesting hog barn nestled in the grove. Both were rotting from the inside out and caving in. The excavator used a pit that had been dug previously adjacent to the grove to drag, burn and bury the refuge from the two buildings. Although we had debated over the possibilities of saving and refurbishing both, realistically they were too far gone.

We decided to use that area for an orchard, and Rebecca ordered fruit trees … cherry, apple, crab apple and plum … that we planted in the spring. We hauled several loaded wheelbarrows of chicken manure to spread over the ruffled soil where she spread clover seed. All summer long I mowed over the weeds until a staunch stand of clover emerged between the trees — most of which survived their first year from bare root to leafing to fall color and eventual leaf drop.

Vega gets a hug as a much-loved dog.

We considered erecting a yurt where the old pig barn stood, and we still might. Most of our energy and investment, though, has gone into building what we lovingly call our “Taj Magarage” near where the old granary stood. Our friend and wood artist, Dale Pederson, who teaches timber frame construction, designed and crafted the timber frame building we’ll use as a garage, summer kitchen and winter passive solar greenhouse, wood shop and office/studio. Dale has put his heart and soul into the project. He, along with our mutual friend, Mike Jacobs, co-owner of the CSA Easy Bean Farm with his artist wife, Malena Handeen, has been here for several weeks erecting and closing in the structure. Hopefully this week the finishing folks will come so we can actually use it yet this winter.

We eagerly await the completion of the beautiful timber frame.

All of this sounds like we have scrunched a lot into a very short time, and I suppose we have. Yet, when I look back on my previous and recent life, all of this seems so simple and laid back. Back then I was juggling the weekly reporting and production of a country weekly newspaper with overseeing a region of Western Minnesota stretching from Bemidji to Worthington, and from the Twin Cities to the South Dakota border, for a foreign exchange student program. That meant motivating and managing a team of up to 15 community coordinators, working with high school administrators to further the program, and overseeing the placement of at least 100 students per year. This included multiple meetings as well as domestic and international travel. The pressure was constant from both jobs, and I’m sure my personal life suffered because of the pressures and time I devoted to both jobs. Interestingly and ironically, my retirement from the newspaper coincided with the unexpected death of my wife of 32 years, Sharon Yedo White. Near the end of the summer Rebecca and I began our relationship. In January of 2013, the exchange student work abruptly ended over policy and personnel disagreements. Those 21 years of recent life was suddenly no longer. 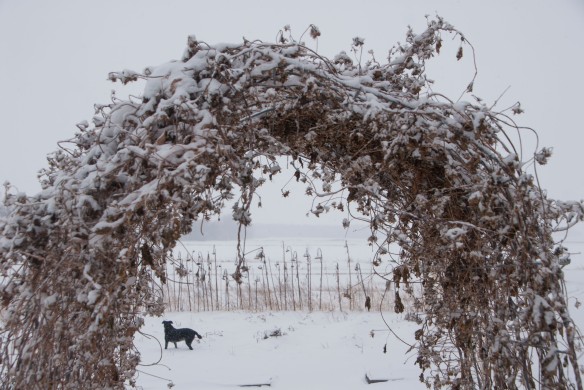 Snow covers the arbor leading into where we placed the garden.

Two months after being fired we found this farm, had our offer accepted, and started the complete remodeling of this house while working to finish and sell both of our former homes — meaning we were working almost nonstop most of the year of our wedding on this place and our two houses. Both were sold around the end of last year.

Relatively speaking, this summer and fall has been comparatively easy. This was a year, with Rebecca’s continued encouragement, that I rediscovered the joys of photography. I have hung three exhibitions of my work and was invited to be among the 45 official artists on the Upper Minnesota Arts Meander. Life has truly moved forth for us both, and we anticipate growing on the experiences of our first winter with fewer issues and more wonderful surprises. 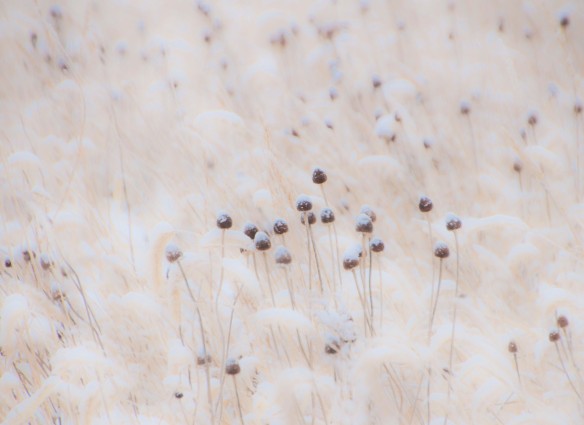 A moment on the prairie.

Our blizzard certainly enhanced a sense of settling in. Of slowing down, and discovering perhaps a different and slower pace. In a sense it’s similar to yoga, where  you are trained to align your breathing with the sense of your soul. Breathe in. Deeply. Slowly. Feel the energy surge through your veins. Hold and relax, then let it out. Slowly. Feel the tension ease from your tired and weary bones. Settle in. Deeply. Feel as your back becomes one with the soul of the earth. Breathe in …

3 thoughts on “The Art of Settling In …”