An overview of the prairie shows patches of grass and forbs. It certainly is far from being a mature prairie.

Beau Peterson, from the NRCS, was out Monday morning for a walk over our prairie, then asked if he could use our land as an example to show others who might be inspired to go native or who are considering converting commodity land into CRP. We were equally humbled, honored and pleased.

This is my second prairie planting, although the first might be excused since it was only a small, backyard native garden. This one covers eight acres of good farming ground with what Rebecca calls “good seed stock” for when nature eventually reclaims the prairie. 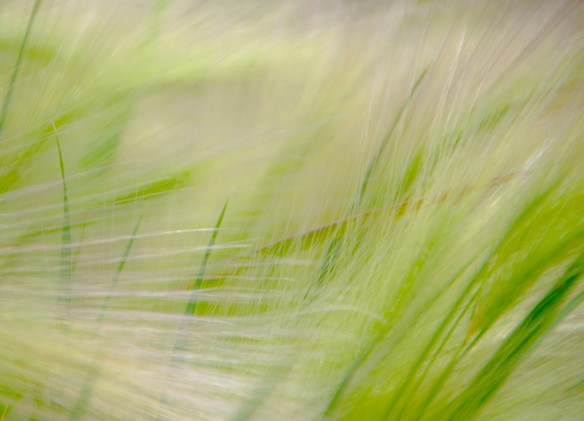 We have some patches of willowy foxtail, of which we have differing opinions.

We put a call into Beau because neither of us could find one of the prime grasses in our mix, Side-Oats Grama, along with other native plants we were expecting. About two steps into the prairie Beau stopped and pointed to a sliver-thin stem of hiding Side-Oats and explained that it was one of the later grasses to emerge. He thought the prairie was coming along quite nicely.

He should have been here a year ago when pigweed and lambsquarter dominated our eight acres. We took our Cub Cadet to the prairie twice, and Beau’s predecessor brought in a prairie-friendly farmer with a brush hog to top off the pigweed as it was coming into the seed stage. After this cutting some patches of grass were emerging in places, and much to our surprise, we were told that the prairie was coming along nicely. Apparently it takes some practice to read a prairie. 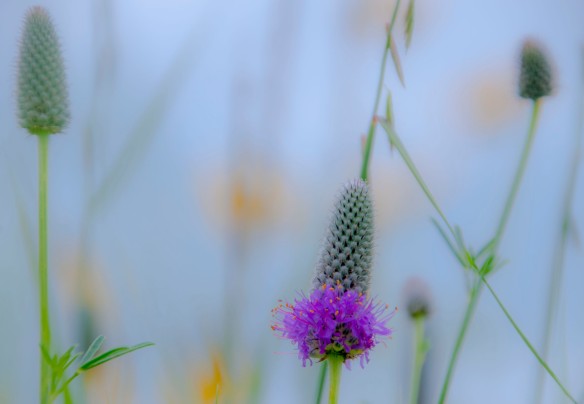 Purple wild clover peaks up here and there for a beautiful contrast.

Our experience here hasn’t been radically different than it was in my backyard planting. Late that fall years ago we received plugs of grasses and forbs and frantically went to work planting what we could. We were told that establishing grasses first was key in providing a base or foundation, so those plugs went in first. Starting early one morning I worked diligently to dig them in before a forecasted blizzard was expected. By mid afternoon I was scraping away snow to dig in the last plugs of Bluestem, Indian Grass and Side-Oats Grama … and none of the forbs were even touched. Fortunately Sally Finzel, of Morning Sky Greenery, said she would overwinter the plugs if I brought them back to Morris.

The following spring weeds completely overwhelmed the garden, which was thoroughly discouraging. Toward the middle of June she called and asked if I was ever going to come for my seedlings. “Why? The garden is shot. Pigweed has taken it over.” Sally encouraged me to come for them regardless, finally using a very sound economic argument: “It’s your money.” 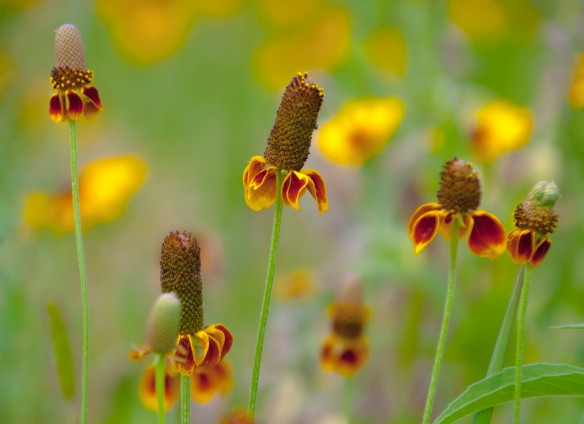 We love these “little dancers.”

After returning with the forbs, I took a deep breath and took a hand spade to the weeds and discovered something rather interesting — beneath that pigweed canopy was a very healthy stand of prairie grasses — not unlike what we have experienced here. Two very long, hot and humid days later, the wilting weeds were piled to the side and all the forbs were planted save for five wild onion plugs. They would go in later since they continued to grow and eventually bloomed right in the seed tray. 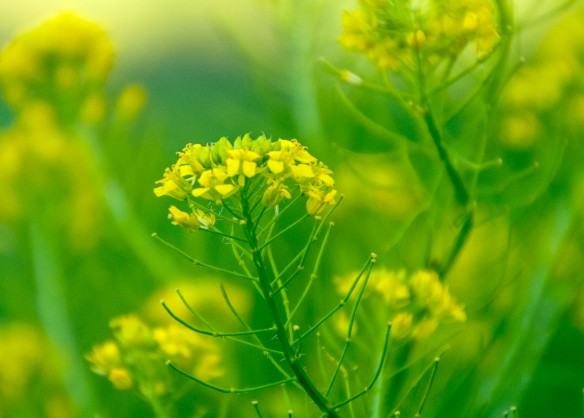 This beauty dominated the prairie in the early succession.

That little garden also offered some interesting obervations about prairies: Never expect the same look two years in a row, since different conditions may favor different plants, and that prairies mature differently; burning a prairie will encourage a bountiful flush especially in the first year; and, that native prairies offer very interesting moments in their cycles of life, presenting an ever-changing profile through the seasons, so keeping a camera handy is paramount.

Our larger prairie has followed form from my backyard experience, and we are both having such fun discovering what the prairie offers from day to day. Right now the prairie is awash in yellow blossoms. Golden Alexanders have given way to Blanket Flowers, Common Ox-eye and Yellow Coneflowers or “Mexican Hats,” to name a few. More and more flowers will be blooming as we move through the green season, and our grasses are maturing nicely, too. Interesting, as well, is that what we see growing seems different than our prescribed seeding plan, and some of what appears on the seeding plan has not yet appeared in the prairie. And, the reason we called Beau. Ah, but what a fascinating mystery!

We find ourselves walking through the prairie almost daily looking at both fading and new wonders. You might find me laying in the prairie with my camera seeking new and hopefully interesting images. Among our plantings were a few cottonwoods and burr oaks, which were planted in two different areas to simulate an oak savanna. On one of our walks we spooked a fawn. As it bounded through the belly-high growth it was hard to say which of us was most surprised. We have heard pheasants “barking” out there, too, which is a bonus … although neither of us are hunters. We have yet to attract meadowlarks or bob-o-links, although both species nest in the nearby Clinton Prairie.

We are quite pleased that our little prairie at Listening Stones Farm can be counted among the beautiful native prairie features of Big Stone County. Besides the National Wildlife Refuge, two diverse areas of Big Stone State Park, the Clinton Prairie along with a number of federally protected wildlife and waterfowl management areas, several farmers have left their original wetlands undrained. Thankfully they take great care and add time to their hectic farming schedules to protect them.

Indeed, we sometimes find ourselves in debate on whether Big Stone, Lac qui Parle or Yellow Medicine Counties have the most devoted prairie acres, and to be honest, one of the selling points for us when we bought our Listening Stones Farm 18 months ago was the close proximity of two active wetlands, our large and overgrown grove, plus the eight plus acres of tillable we now enjoy as prairie, thanks to the help of Pheasants Forever and the local NRCS. Our prairie adventures are really just beginning.

6 thoughts on “Our “Mysterious” Prairie”