Making dinner around here is so much fun. We rarely layer noodles with soups from Campbell’s’, and usually have a glass of wine within reach. One of us will usually stake ourself across the room chatting with whoever has opted to cook. Often we’ll walk around the center island to glance out the big kitchen window to take in what is typically a postcard worthy view. This happened again last night with a startling sunset. 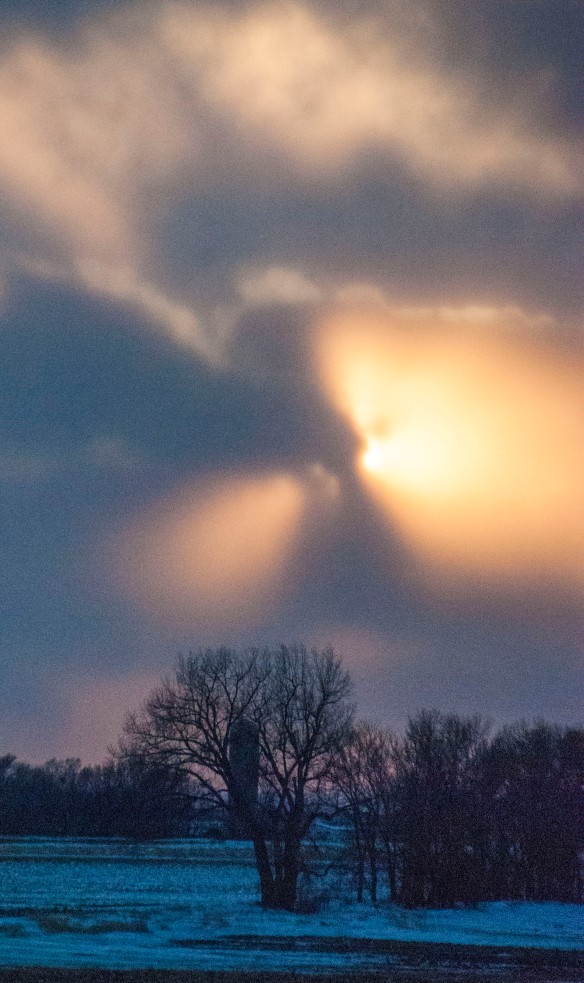 Sunset from the kitchen window.

“Startled” might be considered a bit extreme, and “surprise” might be closer to an appropriate reaction to when we first entered this kitchen where we spend so much of our quality time. This was my reaction on first looking at two double-hung windows with blurring screens found above the kitchen sink. “If we buy the house,” I said as we began our first look around, “these windows have to go. We must have a big plate glass window in here.”

Rebecca and Steve Bruns talking in the kitchen during the remodeling phase. The double hung windows are behind Steve.

Rebecca was no stranger to the house and especially in this kitchen where she recalled having numerous meals with her friends, the previous owners. If she was taken back by my comment, she hid it well. 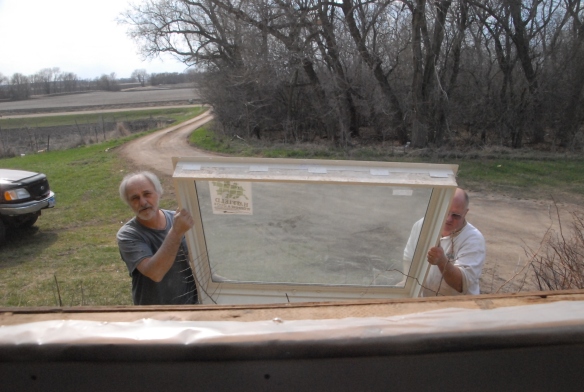 Roger Albright and Steve Bruns bringing the new kitchen window up to install.

The kitchen window after installation.

Windows have long been a fascination. Whether visiting an old farm house like ours, a hospital or motel room, or even a European castle, I always find myself looking through the windows to see what there is to see. You know, “If I were king I’d put a window right here” sort of thing. I’ve never understood blocking a window view with a lamp, or even curtains. This has caused a few arguments and awkward moments through the years, and usually I’ll back down on the curtains. 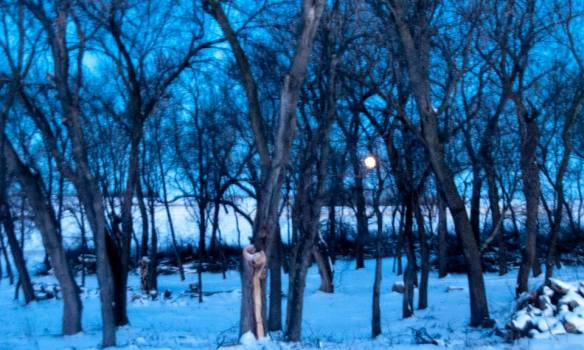 Windows can showcase a larger world much like a picture frame. Through the years I’ve seen some fascinating views through the windows of others. So, in our pending purchase I simply couldn’t consider having all that wood framing and grayish screens blocking such an incredible view of the wooded grove, the nearby prairie or that distant farm site, views that seemingly are varied with each sunrise and setting sun, by cloud patterns, by rain, fog and blizzardy snow. These views never tire. 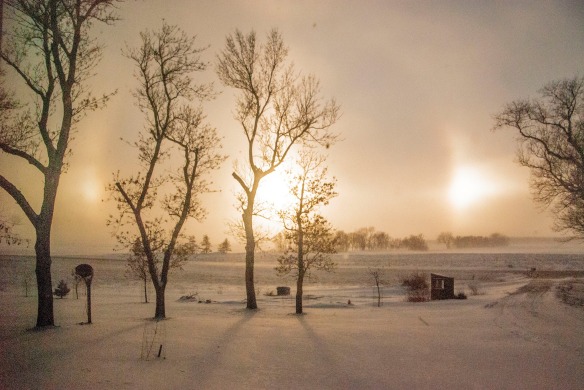 Sun dog from our kitchen window.

This kitchen window was one of two major window decisions we would make in remodeling the house. The other was in the upstairs bathroom where there was no window at all in the East wall. We had decided rather early to completely redo that room. Along that wall was a wide vanity. A toilet was placed up against the adjoining inside wall and was in plain view of the door opening to the hallway. There was no shower nor bath. We would eventually do a complete reworking of the room by removing enough of the floor to move the toilet across the room behind the door, to install a smaller vanity and sink where the toilet originally sat, and by adding a spa bath where the old vanity had been. It while I was framing in the tub surround that I thought of adding a window, to bring in more light, and to add a view. 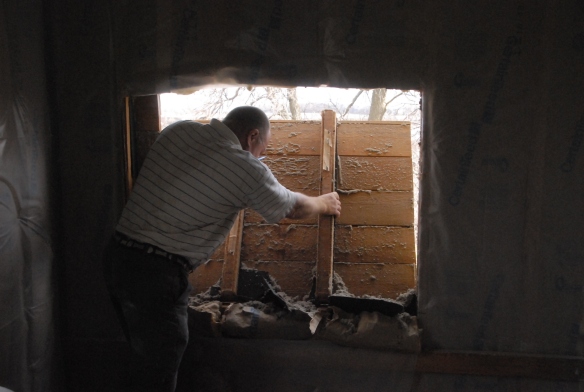 Removing the cut out for the bathroom window.

Tile would be added across the entire floor and as a shower surround. And in that bare wall we cut a hole to add a modest plate glass window we had hoped would give us a nice view of the prairie and nearby wetland while sitting in the bath. That, we’ve since discovered, won’t happen since neither of us have the height of a NBA basketball player. Our view from the toilet, however, has no equal!

Fortunately this house has many windows and wonderful views from all angles. Our front porch solarium has a surround of windows on three sides, and the large windows from our office and family room offer views from the inside out into the solarium.

My muse for the kitchen began while doing a story on the husband of a former colleague who had a stately old house on the outskirts of Maynard. When they remodeled their kitchen they replaced double hung windows with a large open window above the sink that looked out onto their grove and picturesque pond garden. Their new window transformed a rather tired and forgettable kitchen into an exciting and comfortable room, inviting you into the world beyond. The window added life to a nearly barren room, a place where you could easily imagine planting your elbows on the kitchen counter to stare at an enticing outdoor landscape. It wasn’t hard to imagine having the same effect in our new home.

Sun rise through the bathroom window.

As we progressed in our remodeling I found myself anxiously awaiting the removal of the double-hungs. When it finally happened I could barely contain my excitement. It was the same when we finally lifted a ladder to cut through the outside wall for the new bathroom window. I don’t know if my co-workers on the remodeling project were all initially sold on cutting through the wall for that window, but afterwards they were equally as pleased and excited. Especially when we had finished with the tiling that framed the window from the inside.

Those two windows are my favorite places in our new home, framing views worthy of the Louvre every morning and evening. We couldn’t have made better decisions, nor could we be more blessed.

1 thought on “Through Our Windows”