June has sprung, and with it the gardens are growing like mad–right alongside the weeds.

Since the tomato garden is a newly cultivated spot that last year sprouted an impressive selection of summer weeds, the seedbank for pigweed and lamb’s quarter is well-stocked. After a weekend’s worth of rain, a second hoeing was in order to take out the germinating pigweed at the white thread stage.

Pretty much the entire sixteen hundred square feet of the garden looked like this, and with the forecasted rain Friday night and Saturday, these weeds had to go before they could get another drink and start creating a more complex (and difficult to kill) root system.

The tomatoes in their raked-up raised beds needed mulching, too–keeping the root systems a little more cool, suppressing the next flush of weeds, and preventing soil erosion from heavy rains. It took pretty much all day to finish the one garden, with chunks of time for breaks and other work. John pitched in at the end, helping rake the hoed soil back up onto the mounds while I laid straw.

So, things are starting to look a little more put-together in the gardens, and the deer have been fairly moderate in their incursions (Plantskydd helps). The raised beds are sprouting a few new crops since I went willy-nilly out into the rain last weekend and thumbed-in summer squash, cucumbers, flint corn, and okra. I took the early spinach and arugula out from either side of the peas a few days ago, and yesterday I pulled the last of the bolting bok choy, radishes, and sad-looking broccoli raab and rolled up the row cover. 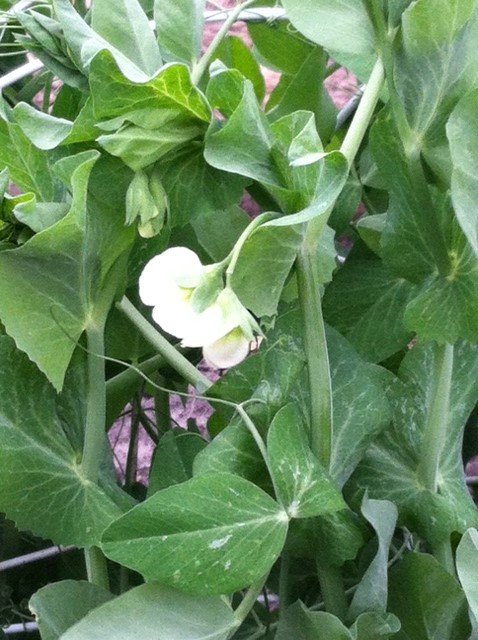 In the early brassica bed, that left a big, open space next to the Hakurei turnips. Thought about planting some fall carrots in there, but those beds are the original ones we inherited with the farm, and they’ve been gardened pretty intensively over the last few years. There’s really not much for organic matter in there, and I happened to have a big bag of my favorite summer soil-building cover crop: buckwheat. So, instead of a crop to feed us, I planted a crop to feed the soil–and the pollinators, too, when it flowers.

Speaking of pollinators, I finally saw the first bumblebee of the season! 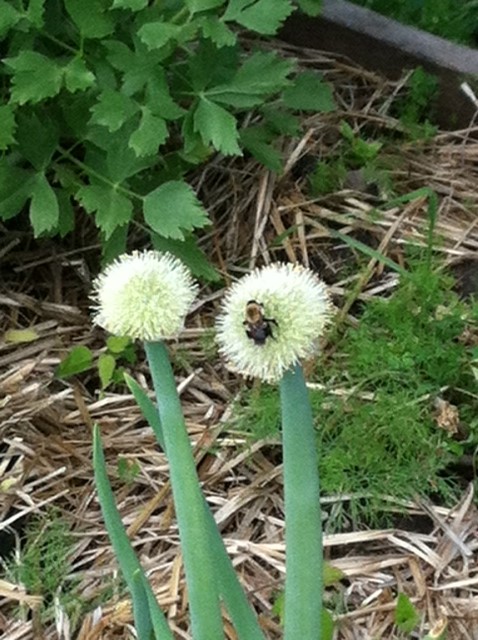 Bumbles love onion flowers, and they always seem especially drawn to these perennial Evergreen Hardy White green onions. They aren’t as refined as some varieties, but they are a great, sturdy, never-say-die crop. These are the descendants of the ones I started from seed back in 2005–they always get divided and tucked in the corners of beds and other odd spots, and I always let them bloom because then I know whether the bumblebees are surviving or not–if there are bumblebees anywhere near, you’ll see them on the onions. 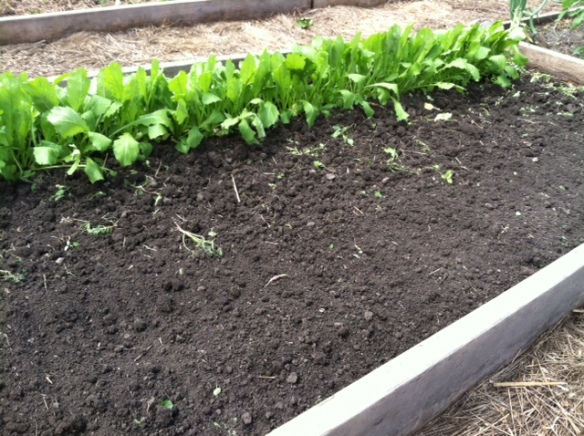 The first image, which is the bed where I cultivated and sowed buckwheat yesterday, looks nice, doesn’t it? All smooth and dark-colored and pretty. It is depleted of organic matter, but looks better than the bed next to it because it had floating row cover on it, which helps absorb the impact of raindrops (and watering), plus it had had a nice leaf canopy from the spent greens I’d just removed. Still, the soil was compacted underneath, and the cool-loving greens that came up early and fast ended up going to seed faster than I’d anticipated–probably due to how warm this dark, bare soil gets when the sun hits it and their inability to sink their roots deeper and tap into moisture reserves.

But if you look at this second image of the bed next door, where the row cover and spent greens were removed a week ago, you can see that the lovely dark soil is crusting and cracking. Not a good sign. It’s hard for new seedlings to break through the surface, and once this soil is cultivated, the fine particles can easily blow in the wind or wash with heavy rain–the same thing that happens on a massive scale in all our clean-cultivated farm fields and leads to soil and nutrients clogging our rivers and streams. This bed will get a fall cover crop–maybe winter wheat–that will be incorporated into the soil in spring. Right now there’s flint corn planted on either side of the peas, and when that’s up enough, I’ll throw down some straw mulch to cover the soil.

The last image is of a bed that got a liberal dressing of composted goat manure and bedding last fall before I planted garlic. I’ve got a couple of summer squash seeded in the middle, and a few other herbs along the outside. Watering this bed is like watering a big sponge. There’s no puddling, no washing–it just all soaks right in and stays there. The plants in it have no trouble breaking through the surface, and are well fed from the decomposed organic matter. Turning a fork-full of this bed reveals lots of worms, whereas the “clean” looking beds devoid of organic matter are mostly absent of these great garden helpers–it’s too hot in there, and there isn’t anything to eat!

But it hasn’t been all soil-building and weed control around here lately. We’ve been dining on asparagus snapped from the many little patches spread around the farmyard and tender salad turnips from our patch and that of a friend with whom we shared the seed. The spent greens gave us some nice meals, and there is more spinach and lettuce ready for the plucking. John even made a rhubarb pie–his very first from scratch with local lard we rendered last winter for the crust.

The guys went fishing a couple of mornings ago and brought home some nice catfish filets. On the way back, they stopped at a pizza place for lunch, and John was telling me about their surprisingly good salad bar. Harrumph, says I, and headed out to the garden to create some supper salads to put that chain place to shame with fresh multi-colored lettuce and spinach, baby dill snippings, chive blossoms, and the last of the early radishes.

And, John spirited us away one evening last week to a secret spot in the river valley. While Martin wasn’t too excited for a car trip to see flowers? Really? Flowers of all things?–the lady slippers were in bloom–literally hundreds of them along a boggy woodland edge in a magical display. Lucky us!

A pair of slippers ready for their lady