Each winter has its own special trials. Last year we were still battling wet snows and howling winds while starting the farmhouse renovation project in April and then on into May. It didn’t help that the snow fence at the end of the drive had collapsed, and the ground was too frost-bound to drive the posts back in place. The drifts blew right over it, blocking our access.

Traveling the six miles out to the farm from Clinton each day, we’d grit our teeth with a “Here We Gooooo!” and gun it down the gravel road turned to soup and slush, calculating that perfect acceleration point to blast through drifts and potentially bottomless mud holes without careening off into the ditch–wipers on full blast to clear the spray.

It occurs to me that the reason I have no images of our road in full-on mud season is because I was focusing on avoiding getting stuck.

There is an art to this kind of driving that rural people learn at an early age. Failure to master it can mean a long, cold slog to the nearest inhabited farm or paved possibility of a ride back to town–even worse are the decades of ridicule when everyone finds out.

Granted, I’ve only lived up here for a little over three years, but for sheer volume of snow, my first winter in 2010-2011 was the biggest pain. I was living in a little cottage down by Big Stone Lake–one with a shared parking area and steeply-inclined approaches. The problem was, it just kept snowing, and no one was living in the houses on either side of me to help pay for a plow to clear the whole darn thing every two or three days, which seemed to be the frequency of the storms. Instead, I’d shovel the patio by the door, then up the stairs to the parking area, then an increasingly narrow and walled-in path across the parking area and up the second set of steep stairs to the highway, across which I parked my continually plowed-in little pickup. 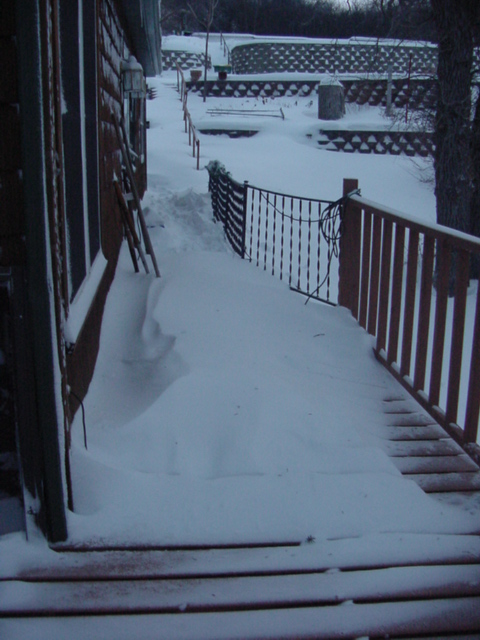 Actually, I had to shovel down that second set of stairs–and sometimes two or three times a day because the MN DOT plows would come by and shove big hunks of snow and ice down into the stairwell, which was bordered by high retaining walls. Once I managed to get all the snow and ice chunks down to the bottom of the stairs, I’d scoop and fling them up on the top of the two, then three, then four-plus foot high piles I’d created by attempting to keep my walking path open.

I moved off the lake as soon as I could get out in March–though getting in to the new rental place was also a problem–the driveway and front walk had untouched four foot high drifts that I stabbed at valiantly but ineffectually with my shovel until the guys at lumber yard across the street took pity on me and made short work of it with a loader. I still had to carve and stomp and snowshoe walkways in the backyard for the dog to do her business–it’s hard to squat when you’re already up to your ass in snow! I think it was late May before the last little bit of snow on the north side of the house finally melted.

Compared to that first winter, the second one seemed like a breeze. It never got brutally cold for more than a couple of days; we had snow, but it came in manageable doses. After a mysterious fire in the rental house and a few months living with friends on the South Dakota side of the border, I’d bought a house and returned to Clinton, and even though it was a good-sized space, it wasn’t unreasonable to heat. All in all, 2011-2012 was an easy winter, requiring little of the heroic efforts of my first western Minnesota season.

I don’t want to jinx it by commenting on a season still in progress, but I don’t think we’ll look back on this winter and curse the snow (it IS snowing now–I think–and the wind is creating the white-out conditions we’ve grown accustomed to). We’ve yet to call our neighbor to come with his tractor, and we’ve fired up the snow blower only once–and even then the situation wasn’t dire–we could still get out; we just wanted to clear in case of second and third “helpings” piled on top.

No, this year’s need for fortitude isn’t about the snow; it’s about the cold. Blistering, brutal, ridiculous cold. Subzero cold that lasts for days, with weird little intervals of 24 hours or less where the wind shifts suddenly and raucously to the south, the temps rise overnight, and then plunge again the next afternoon. Last Wednesday, the temperature was 26 when I walked into a evening meeting. On leaving two hours later, it was 41. The next morning, the warmth had fled like a summer dream, and the melt water was ice. Just yesterday, it was a balmy 40 degrees, but the wind whipped up again, and overnight it dropped into the teens. This morning it was 18 with a +4 windchill; this afternoon it is 0/-26.

“Real” temps are supposed to hit 20 below tonight.The mailbox just beyond the edge of our grove is playing its usual game of now-you-see-me, now-you-don’t, and in the latest of a series of cancelled events, missed meetings, and best-laid-plans, our expected dinner guests won’t be joining us tonight. John finally took down the wind chimes yesterday after I couldn’t take their nightly cacophony anymore–two of them had lost their clappers–one was recovered but the other we can only hope to locate in the spring.

And this is before we get Polar Vortex, Part Two starting next weekend and potentially lasting through the beginning of February. Will we even be able to tell the difference? Do I have the fortitude it takes to face the answer to that question?

Since I can’t bury my head in the sand (it’s frozen solid, after all), maybe I’ll just bury my nose in that pile of seed catalogs and order forms. In my four layers of clothing. Under a blanket.

With a BIG glass of wine.