This haunting came back to me one recent foggy morning while standing on a rise overlooking a frozen wetland near our farm. With the low morning sun and the fog, it was nearly impossible to make out the rows of untilled corn stalks adjacent to the native grasses. We are fortunate that our neighbors in Minnesota’s Big Stone County have retained many of their wetlands, so once again my mind played the what-might-have-been card. On mornings like these you can almost see back to yesteryear without even closing your eyes. There in front of me was the “ghost” of a prairie horizon, ghosts of which I’ve been seeking to photograph for a few years now.

After years of capturing intimate images of pieces of the fractured prairie, one late afternoon I pulled off the gravel road that divides the Bonanza Area of Big Stone State Park and gazed up at the native prairie grasses and burr oaks that grace the hills above the lake. As I watched the winds caress the spindly spines of bluestem and Indian grass, I realized I was viewing a rare scene — an actual, almost pure prairie horizon. Of course, just out of sight and over the cusp was a woven wire fence, and there was the road, so this was at best a narrow ribbon tease of the distant past. That was when I began to wonder if could I pull away from my close up style of prairie imagery that has gained me a fair audience over time and make photographs of horizons? Was it possible to do both effectively?

Prairie grasses and burr oaks give visitors to the Bonanza area of Big Stone State Park a glimpse of an original prairie landscape.

In those “artist statements” required of the juried shows, I use a basic personal “boiler plate” where I describe my goal of portraying this last one percent of (a previous landscape, environmental ecology and/or biome) prairie potholes that was once a signature of most of Western Minnesota and the East River region of the Dakotas. Nowhere on earth has man so altered a natural biome. Yes, 99 percent of the native prairie and a like percentage of the wetlands (potholes, sloughs or shallow lakes) has been ditched, tiled and drained and replaced by what in the last 70 plus years has “evolved” into industrialized agriculture. Truthfully, no one alive today can recall the pre-settler landscape. It’s long gone. 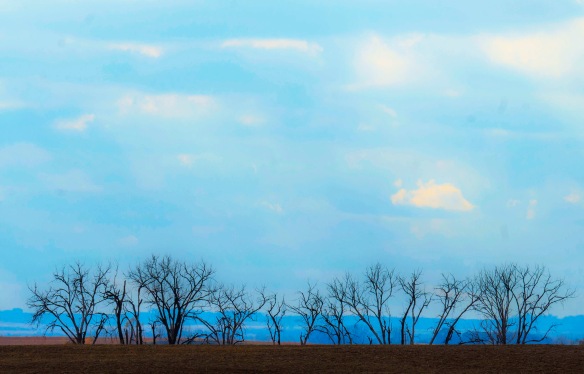 Are the cottonwoods along Lost Creek a look into the past?

As I tried to change my viewing away from details to vistas, I was in for a mild surprise: the nearly impossibility to shoot a picture of a horizon, or landscape, without showing some affect of mankind. Power lines. Jet contrails in the sky. Row crops. A house or abandoned farm grove. Or, if you’re a rigid prairie fanatic, and yes, there are some around, who find non-native trees that have taken root just as invasive as the roads and power lines. In the olden days before settlement, native tree species on the uplands were basically burr oaks. In the wetlands you could supposedly find willows rising from the cattails, and along the rivers, tall and commanding cottonwoods. Most of the rest of the tree species were introduced. Cores pulled from the few remaining wetlands provide clues to what was alive since the last glacier 12,000 years ago.

So, in short, my work to capture a series I had intended to call “Horizons” has not worked out, although that doesn’t stop me from dreaming as I did on this recent foggy morning.

This isn’t to say I advocate returning the prairie to pre-settlement days as some of my critics have suggested as my goal. Not only is that unrealistic, neither is it a goal. Can’t we strive for a balance the forefathers ignored? Many years ago I interviewed a county commissioner whose political career began when as a young dairy farmer he became a community organizer in an effort to create a favorable vote to channelize Hawk Creek and have it permanently reclassified as a “federal ditch.” He mistrusted my intent with the story and said more than once: “We don’t want to go back to those days of fighting mud and mosquitoes. This is a vast improvement over those days.”

This area of Chippewa County is called the “black desert” because it is basically exposed black dirt between plow down and protective crop canopy … sometimes eight months between the two.

A few years back CREP helped restore some acres that should have never been plowed, yet was only a “drop in the bucket.” Adding to my concern is that we simply aren’t taking adequate care of what we have altered. We see very little use of cover crops, and one young farmer told me that it is likely a waste of money because by the time harvest is completed there isn’t enough growing season to establish a cover crop. My argument is that there are forward thinking farmers who are successfully using cover crops to protect their soils. No till is another tactic, and perhaps the least expensive of all is to simply quit fall tillage. Meanwhile we see ample evidence of soils blowing and washing away without any real protection for the eight months between harvest and adequate crop canopy. Stubborn wetlands resist efficient drainage, and farmers insist on planting corn, soybeans and sugarbeets both there and on the hillside blowouts that glow a bright tan where the topsoil has eroded away.

An image from a foggy sunrise on a nearby WMA where the bluestem florishes.

Multiple studies have shown that today’s agriculture has basically ruined our lakes and rivers in the southern half of the state. The lakes around Albert Lea, for example, are so polluted that I’ve never seen a boat in nearly 35 years of travel over the I-35 bridge. a trip I’ve made numerous times. Former community celebrations honoring the two lakes there have reportedly died because those lakes are lifeless from the runoff of industrialized farm chemicals. This is a familiar story in many of the sparse, undrained lakes below I-94 and into northern Iowa and more recently into the Eastern Dakotas. 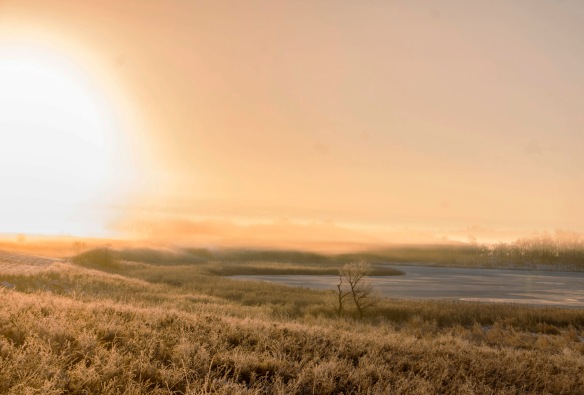 My most recent horizon image shows a frozen wetland surrounded by prairie. Many farmers in Big Stone County have retained their wetlands.

My apologies for climbing upon the soapbox since this began as a statement about a severe lack of unblemished prairie horizons and became a conservation policy rant. Yet, it is what it is. In reality, the prairie no longer exists. If you look hard enough, and long enough, you’ll find remnants of restored native grasslands, and even fewer rare instances of actual virgin prairie. As long as we maintain and adhere to the policies promoted by the USDA’s Farm Bill, industrialized agriculture will remain king. And you will know that by looking across the landscape searching for a human-free horizon … unless you’re blessed by heavy fog.